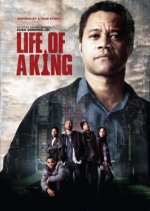 Another great movie is Life of a King, starring Cuba Gooding Jr. Gooding plays Eugene Brown, a man just released from prison after serving a seventeen year sentence for armed robbery. After failed attempts to find honest work, he lands a job as a janitor at the local high school.

The moment Ms. King leaves the detention room, the kids are out of their seats and acting up. Eugene tells them several times to sit down. They ignore him each time. But then Cliff said to him “Or what? You some kind of tough guy?”

Eugene stepped into the challenge. He came around the desk and walked right up to Cliff. I mean, man, a dude who just got out of prison after seventeen years is probably someone you don’t want to pick a fight with. Eugene and Cliff stare at each for a minute, and then Cliff turns away, goes back to his desk and sits down. The rest of the kids soon sit down as well.

They realized Eugene was not a pushover and they had better respect him.

The next day Ms. King comes across Eugene in the hallway and expresses how impressed she was with how he handled the detention kids.  She then tells Eugene that Ms. Gadbaw is not coming back and it turns out Ms. King had not been able to find another detention monitor. She gives the job to Eugene.

Eugene sees this as an opportunity to teach the kids Chess, which he had learned in prison. He believes Chess is more than just a game, that Chess can be useful in all life events, because it teaches you how to think before you act.

Later, when his prison history comes to light, Eugene is fired. But he soon buys a house and turns it into a Chess club called Big Chair Chess Club.

Life of a King is based on a true story. Eugene Brown is a real person who did start Big Chair Chess Club as a means “to teach inner-city children a lesson of life he learned the hard way.”