The Bible Does Not….

The Bible does not condemn abortion, but instead gives instructions on how to perform abortions. The Bible, however, has quite a bit about controlling women, and I think that’s what the overturning Roe v Wade was really about.

We Don’t Need No Church School 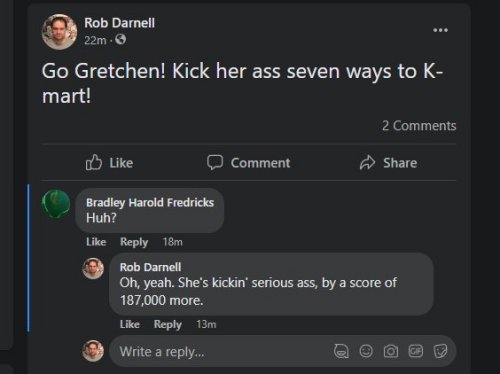 Call Them What They Are

Flashbacks today. Of all the times police have detained me for walking with cerebral palsy. And I’m reminded of an article that a cop I know had posted on Facebook a few years ago. This article was written by a cop and it was about how police see everyone else as criminals, liars and troublemakers.

I don’t want to believe that every cop shares that outlook, but assuming it’s true, if all cops really see everyone else as a problem, wouldn’t it be fair that a lot of people see the police as a problem?

One of the reasons I want a gun is you can’t count on the police for shit. New information comes in and it sounds like 40 cops were outside Robb Elementary for an hour while parents begged them to go in.

I’m in Facebook jail for suggesting the court of law should sentence recently arrested Leader of the Oath Keepers to death, for the crime of treason.

So, if you thought Facebook was only cracking down on right wingers for comments about the left, you were mistaken.

I’ll never call myself a Democrat or a Republican, a right-winger or a left-winger, a conservative or a liberal, because I believe these two sides are ripping the country apart and because I have values that fall under each. I might call myself a Christian and an American, though.

I think of Stanley Milgram’s experiment. Also, in the book “Berlin Embassy”, which was written while the author, William Russell, was serving in Germany in the late 30’s and early 40’s, there’s a scene in the first chapter that I often think about.

Two SA men actually helped a Jewish man who had fainted outside the embassy. They carried the Jewish man into the building and put him in the waiting room, and then they told Russell and helped Russell carry him to the doctor.

Though, in that same scene, Russell notes the Jewish shops that he had seen “these Brown Shirts and the Black Shirts convert into shambles, of the burning of merchandise, of the bruised and broken people who came to us daily for protection.”

“You know, it’s too bad about these people,” one of the Brown Shirts said before the scene ended. “If they only had sense enough to live like decent people, der Führer wouldn’t have to send them away from Germany.”

That sounds so much like what I hear from supporters of Trump. It’s the same ignorance about cultures they don’t understand or accept. But at the same time, I think most would do the decent thing and help people they hate if they happen upon such a person who is in need of help, at least while they’re not expected to be mistreating said people.

It’s complex and complicated, and not at all in black and white.

While I try to maintain my relationships with my Trump supporting friends and family, as a person with disabilities, I feel betrayed by anyone who can vote for someone who is so cruel to people like me.

I don’t know how to deal with it. Part of me wants to just ignore it all and accept whatever happens, but then I see or hear something that rips me apart.