I’ll never forget this game. When Jordan Poole won the game for Michigan as the last second ticked off. That was in 2018, the year Michigan made it to the championship game and lost to Villanova.

I remember how I freaked out when Poole made that shot. I’d say that was one of the greatest moments in NCAA basketball.

Michigan’s men’s basketball team just lost to Michigan State. 69-87. I thought Michigan might catch up in the last few minutes. They did not.

When I realized the men were playing State today too, I thought the men and women teams had traveled across the state together, but nope. The women’s game was on Wolverine turf and the men’s game was on Spartan turf.

I just watched Michigan’s women’s basketball team beat Michigan State. 35-32. They were toe to toe when I turned the game on and it was a little tense.

There are times when I’m in discussions about sports and someone says they don’t have time for men and their balls. I immediately think about the women’s leagues that are struggling. I think WNBA is doing okay, but it’s not as popular as NBA. I know there is, or was, a women’s professional football league. Women’s football leagues surface and then collapse because of lack of support.

When people say they don’t have time for men and their balls, I’m thinking maybe they would be interested in supporting the women’s leagues that need to grow their fanbases.

Why didn’t they just say that? Why did they have to make a comment about men and their balls?

I’m going to watch the Michigan -North Carolina game and work my way through this six pack. 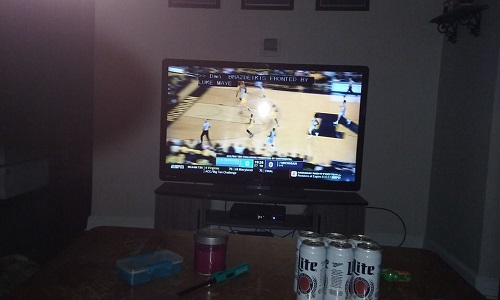 Villanova was a mighty foe. Not even Jordan Poole could save us. Villanova beat Michigan by seventeen points. I think they  had two or three guys with an incredible talent for making shots far outside the arch.

My team  accepted their loss with  proper sportsmanship. I’m proud of them. They didn’t let us down. They played their best.

I still have some whiskey left, so I’m going to drink that.

That was the Michigan-Loyola Chicago game. Michigan had me pretty nervous. In the second half, they were far behind. But they caught up and got ahead. The final score is Michigan 69- Loyola Chicago 57.
Michigan will be in the NCAA Championship game, which will be Monday night.
Next up is Kansas and Villanova. I have friends who are Kansas fans, so I hope their team wins. It’d be nice if we could faceoff in the Championship game.

I’ve been on the fence about whether I’m ready to crawl out from under my rock and get back into blogging daily about whatever random thing happens to be on my mind. I don’t feel ready. My long withdrawal has me feeling like I’m climbing a steep hill just to write this entry. Chances are, once I post the entry, I’ll then want to take it down and crawl back under my rock.

I’m glad you asked. Stuff has been, meh. Usually when people ask me that sort of question, including “How are you?” I just shrug because I don’t fucking know. I don’t like to say “Good!” unless it feels entirely true, and don’t like to say “Bad!” for the same reason. I’m usually in the middle of good and bad,  But to say “In between” would just confuse people and to explain beyond that might get too wordy.

That’s an easier question to answer. I’ve been doing what I always do. Productivity is up. Been watching The Walking Dead on Sunday nights and I checked out the new series on AMC. The Terror. It’s interesting so far.

I did watch Roseanne last night. Don’t really have any complaints, but I thought the actors were a little rusty. I don’t know what they’ve done since the shows first run ended in 1997, but I had the impression that it’s been a while since any of them had any major acting roles.

Roseanne was one of my favorite shows when I was growing up and I’m pleased that the show was rebooted. It’s like reconnecting with old friends after twenty years. I was surprised when I got on Facebook today and saw posts from left-leaning friends declaring their desire to not watch the show, because they don’t like Roseanne Barr’s positions on political and social issues.

I admit, I didn’t know about Roseanne Barr’s politics until I saw these posts. But after watching last night’s episodes, I thought it would be far right wingers voicing disgust about the show. It’s my understanding that it was Sara Gilbert who put the reboot together, not Roseanne Barr, and I’m under the impression that Gilbert  is the one calling the shots, but I could be wrong.

“Wob, what about NCAA Basketball?”

I am following the Madness. Michigan’s in the Final Four, that game will be Saturday night. Very exciting. On the side, baseball is back. The Tigers just finished Spring Training and their first regular season game is tomorrow in Detroit at 1 PM, Vs the Pirates. But the Tigers have a new team this year and it might take time getting used to that.

So, with that subcategory now made, here’s my first NCAA Basketball post.

Today I caught two Michigan basketball games. First I watched the women’s game.  They played Indiana. It was a tough game. Michigan was behind by about 20 points through much of it.

I laughed out loud when I realized how often the players were knocking each other down. I don’t think I’ve ever seen a basketball game where the players knocked each other down that much. It was like watching bowling pins fall after a cannonball crashes into them.

I’d say there were so many collisions and falls in this game because Michigan was really fighting hard to get ahead of Indiana. Indiana was putting in just as much effort to keep Michigan from getting ahead.

It was a pretty exciting game, but Michigan didn’t make it. The game ended with Michigan 61 and Indiana 72.

After the women’s game, I watched the men’s game. The men had better luck, beating Wisconsin, 64-58.