Baez played real hard tonight, I thought. Did you see how he dirtied up his uniform? Though he didn’t make it in himself, he played a big part in getting in the second run for the Tigers. The Tigers still lost. The game finished up with 2-3.

They’re 8-17 for the season, so far. It’s looking like another losing season. But I can live with it. I’m just happy to have baseball. Though none of the Detroit teams have been showing much promise, they are and will always be my favorite teams. I will always love the Detroit Tigers, Lions, Pistons and Red Wings.

Kelly Olynyk made this shot with less than a second left on the on clock. Pistons win, 127-126. 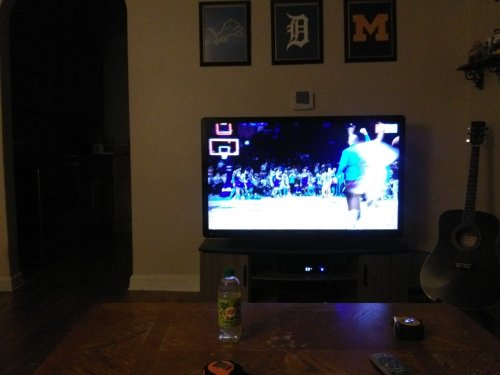 Low production today. Only 171 words into the novel, nothing into the story. Pistons won, 106-103. Gonna make popcorn and finish an episode of Six Feet Under.

I considered ordering food for supper, but I’ve been spending too much on DoorDash lately. Need to give it a rest.

Besides, it’s been snowing, I didn’t feel like shoveling the driveway and sidewalk today. I think it’d be rude of me to expect a DoorDasher to trudge through knee-deep snow to bring my order to the door.

So, I cooked ribs.

While looking for a game to watch, I discovered the NBA G-League. Can’t say I heard of the G-League before. I guess it’s like a minor league to the NBA. I’m not up to speed on what the NBA calls their lower-level affiliates, but I know every professional sport has them.

I decided to sit through the game. I enjoyed it. Most of the players did not appear to be as tall as the usual NBA player, but they played just as skillfully.

Production has been slow the last couple days, but I got a few more pages into each project. The short story was feeling like a dud in the beginning, but I like how it’s going now. The novel is taking a direction I did not expect. I’m a little surprised and disturbed by what I’m writing in this current chapter.

I don’t plot out my projects. I don’t have time for plot outlines, and I don’t understand writers who do. I start a story and I stick with it until it closes up somewhere. I generally don’t know what’s going to happen in the story until it happens.

DoorDash recently added some more restaurants. One of the new listings is Maude’s Alabama BBQ, which is owned by my uncle Ron. I already ordered from them a couple times. I might be biased, but I think their food has a quality that I haven’t found in other restaurants.

They now have two restaurants, one in Flint and one in Lapeer. If you haven’t tried them yet, you should. 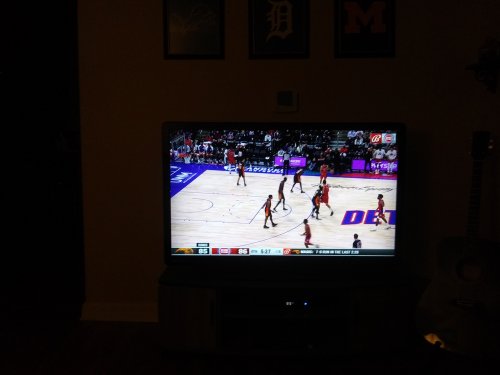 The Pistons stayed toe-to-toe with the Magic tonight, winning, 97-92.

I wish the NBA would figure out that when one team wears a reddish color and the other team wears a brownish color, it’s hard for the colorblind of us to tell who is who. The game is less enjoyable and more frustrating. I could accidentally be cheering for the Magic. Thank God, I wasn’t at the game, ’cause that would’ve been embarrassing.

I made it to Kroger today. A lot of stuff was cleaned out, but it wasn’t as bad as I had expected. I’m not happy that prices have gone up, especially on the meat products. The meat is costing twice as much as it did a few months ago.

I used to be able to get a package of pork chops for around five bucks, now it’s more like $10. But I found enough meat to fill my freezer.

I started the next story today. I like it’s beginning. Hope it stays satisfying. Think I’m going to pull an all-nighter. I got down three pages of fiction so far today, two into the novel and one into the story. I like to try getting at least five pages into each every day.

I Didn’t Blow Up the Kitchen

My cousin Tony gave me a stuffed chicken recipe. Today I gave it a try. I don’t think I did everything exactly right, but I think it was close enough.

I messed up the pockets when I cut them in and I think I overstuffed them with the cheese, asparagus and tomatoes. But it still worked. While cooking, a very pleasant smell filled the kitchen.

I just ate the best meal I ever cooked for myself. It was two good-sized stuffed chicken breasts. I feel fat right now. I’m definitely cooking this again, and I’ll probably do better next time.

The Pistons and Hornets are having a close game.

I soaked chicken in Open Pit honey flavored barbeque sauce before broiling it. It wasn’t bad.

Made it to the end of Inception today. Good movie. Might watch it again.

That was a good game. The Pistons beat the Celtic, 116-103. But I wish the Pistons didn’t miss their foul shots so much.