The Tigers lost both of their games today.

I was channel surfing and I see NHL is back. I have the Blue Jackets and Maple Leafs on. It’s the playoffs. I don’t know how long NHL has been back.

I just now finished eating my late supper. Steak. I put the hot sauce my cousin Tony sent me on the steak. I don’t think people normally put hot sauce on steak, but I couldn’t find chicken wings at the grocery store yesterday.

The hot sauce is good, and it has quite a burn. I’ll probably use it on just about everything I eat.

I cooked the stuffed chicken breast again. This time I did a better job cutting in the pocket and stuffing it. It was my last piece of chicken and smaller. Within the next few days, my brother is going to pick up my next order from the Brower Farms and bring it to me, and I’m going to try this recipe on him.

Wrote five new pages into the novel. Edited five pages of a short story. Might get more work into the novel and story tonight. Went out to eat with Dad. I had Lake Smelt and Fries, which was mostly good, but then one of the smelt pieces had something funny about it and I damn near threw up on the table. Instead the Godzilla of burps blasted out of my mouth. It was embarrassing, but I survived.

I got a new order from the Brower Farms today. I really, really love the cuts of meat I get from these guys. I don’t like buying meat from the grocery store anymore, because I have a hard time finding satisfying cuts. The guys at the Brower Farms know how to cut meat satisfyingly.

The Red Wings just beat the Senators in a shootout.

Dug up trees today, to sell. Got home in time to watch the last quarter of the Michigan game. Watching the Red Wings now and having beer. 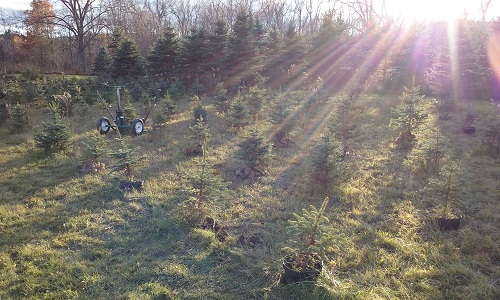 Just got home. I had a bunch of stuff in mind that I wanted to blog about tonight, but I’m too damn tired. All I want to do is drink beer and watch the Red Wings. 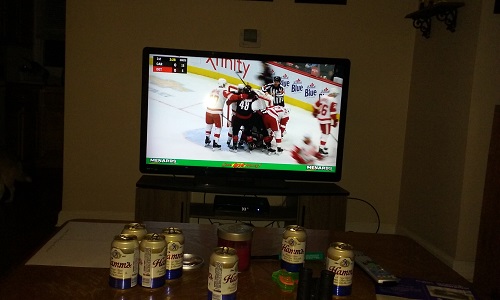 Got the Red Wings on. Preseason game. 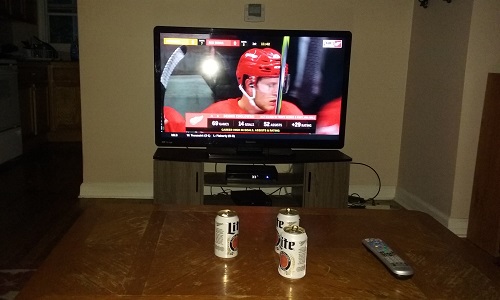 The Pistons started first, against the Dallas Mavericks. I think the Piston-Maverick game was in the second quarter when the Red Wings started their game against the St. Louis Blues.

I spent much of the evening flipping back and forth between the two games, but the Pistons had most of my attention. They played very well tonight. They were ahead of the Mavericks the entire game, leading by more than twenty points at times.

The Mavericks were closing the gap as the final minutes ticked off, but when the time ran out, the final score was Mavericks 91 and Pistons 98.

The Red Wings and the Blues were starting their third period when the basketball game ended. The score was still Blues 1 – Red Wings 0, which it had been since the first period. The score only changed within the last minute when the Blues shot the puck all the way across the ring and right into the goal. So, bummer there.

Major League Baseball is finally starting up. Though it’s not on TV, the Tigers’ pitchers and catchers have reported in and had their first workout yesterday. The first Spring Training game is next week, against the Moccasins, but I don’t think it will be on TV.

It doesn’t look like the Tigers will have a Spring Training game on TV until they play the Yankees on March 11. The Tigers will start their Regular Season on April 3rd, against the White Sox.