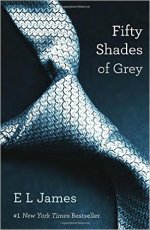 Oh my, Fifty Shades of Shit. Not. Really, I didn’t think it was bad. It was silly in places, weird in other places, but otherwise I thought it was a decent book. Those who pay attention to me on Facebook might remember that I decided to read E.L. James‘ Fifty Shades of Grey because of all the negativity I was hearing about it. I mean, jeez, a lot of people seriously trash this book. They treat it like it’s the most horrible thing ever written. They insult people who admit they read and enjoyed the book. It’s just my opinion, but I think some of these people–not all of them, mind you–are fucking jerks.

No one should be ashamed of what they read. Read whatever you want. Don’t let anyone tell what you should and should not read. If you enjoyed a book, anyone who insults you over it is an asshole. Stories are subjective, same as any art. What one person enjoys, another person might hate. That’s understandable. But what’s not understandable is the amount of trash people are throwing at the author and the people who enjoyed the book. That’s bullshit, especially when the content of the book doesn’t even seem to be what all the negative reviews are claiming.

Is it that the author doesn’t use very heavy prose, that she keeps the language pretty simple? Is that why people say the book is badly  written? If so, I’d hate to burst your bubble, but sometimes using simple prose makes it easier to read. I found Fifty Shades very easy to read. It had a comfortable, relaxing flow to it. How is that bad writing?

Or is it that Anastasia Steele’s thought process contains a lot of jeez, oh my, holy fuck-shit-cow? Is that why it’s badly written? If so, I don’t see why that’s a big deal. Every inch of this book is in Anastasia’s point of view and I found all those silly thoughts to be true to her character. I know people who seem to think the way she does, so I found all that realistic.

If there’s some other reason why so many people feel the book is badly written, I can’t put my finger on what it might be. I can see how the writing might not have worked for you, but I wouldn’t say it’s bad writing.

The story rolls in a way that makes me think of an Aaron Spelling soap opera.

Anastasia Steele seems to be a bit naïve, but she knows what she’s looking for in life, career and relationship-wise. She thinks for herself. She speaks her mind. She’s not an incredibly strong person and she doesn’t have the best self-esteem, but she makes her  own decisions much of the time. At least that’s what I saw.

I guess the biggest problem people are having with Fifty Shades is they feel it’s promoting rape culture. I really don’t think it is. I didn’t see it that way.

But he didn’t force her to do anything. He didn’t rape her. He talked her into letting him spank her and that stuff. But he let her decide what she was comfortable with and what she wasn’t. They were boyfriend-girlfriend. Christian was a jerk a lot, but he was also good to her too.

The book wasn’t all sex, sex, sex, spank, spank, spank. There was actually more to the story than that. Christian has a lot of issues, but he was aware of them. He even put in effort to be more of something Anastasia would be happy with, because he wanted their relationship to work. Anastasia was doing the same for him, trying to be something that would make him happy.

How about that? Anastasia left Christian Grey and he let her go.

I think a lot of people read this book with a biased mindset. That they had already heard all the negativity about it before they read it for themselves and had already decided they weren’t going to like it. I say this because there are so many claims about this book that I didn’t see. I don’t know what these people are talking about.

Furthermore, this isn’t a story about you or anyone you know. It’s a story about Anastasia Steele and Christian Grey, who are fictional characters.. Whatever goes on between them, who gives a shit if it’s right or wrong, it’s just a story. What are y’all so pissed off about? You’re like the people who insist Santa Claus is white not black. It’s also interesting that the people who want to rid the world of Fifty Shades of Grey are the same people who get uppity about censorship.

All right, now, did I like Fifty Shades of Grey?

Eh, not as much as you were probably thinking. I read the whole book. I don’t see anything wrong  with it, but at the same time, I don’t feel very strongly about the story. I can see why it has done so well on the market. I think it deserves to be the best seller that it is. In some ways I did like it, but in other ways it was kind of boring. Not saying it was badly written, it just didn’t interest me much.

So, no, I probably won’t read the rest of the series.

I feel like there was more I wanted to say,  but I guess it slipped my mind.