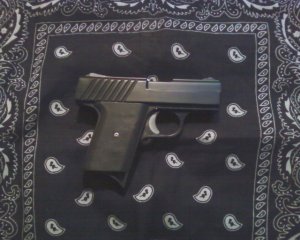 The Cobra Denali is another pistol I own. It’s small, smaller than my hand. I often just stick it in my pocket. Yeah, it rides pretty well in most of my pockets. The Denali is a .380 ACP. Holds five rounds in the magazine and one in the chamber for a good 5+1.

Before I bought it, I did research on it, as I tend to do with any gun I’m thinking about buying. I read articles and watched videos. Most of the articles described the Denali as a problematic pistol, reporting constant jams, and the videos showed the Denali jamming constantly.

So far, my Denali has only jammed on me once and that was after I’d gone through a couple of boxes of bullets. I just needed to clean it and it was good to go again. I’m very, very pleased with my Denali. It handles very sweetly.

I’ve run only PMC ammo through  it. That’s one of the three ammos Cobra Firearms recommends.  So, if you’ve oiled your Denali’s feed ramp, but are still having problems, it might be the ammo you’re using. I’ve also heard that some gun oils don’t work so well with certain guns. I don’t know which oils those might be, but I use Hoppe’s 9 and have no complaints about it.

The breakdown process for the Denali is a little frustrating, I admit. It doesn’t come apart the way most other semi-auto pistols I’ve used do. When taking the Denali apart to clean it or whatever, you got to be careful or the parts will fly all over the place. But that’s my only issue with the Denali and I consider it to be a minor issue.

I heard that all Cobra firearms are handmade instead of machine made. I think that’s nice. The people making these guns do a good job.