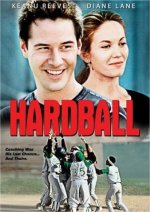 If you haven’t seen Hardball yet, I’m probably going to spoil it for you. There’s just a bit that I want to say about this movie. I watched it for the first time the other day and watched it again the next day. I was very touched by the movie. It’s another one of those kids’ sports movies, but then not exactly. It kind of makes you think of the original Bad News Bears, but with a harsher tone. Rated PG-13. Probably does have the go to be classified as a kids movie, but at the same time I’d say it’s a movie for adults.

Keanu Reeves is the star. He plays Conor, a gambler who is deep in debt. In order to help payoff his debt, a friend offers Conor a job coaching a kids’ baseball team.

What really caught my interest is the baseball team and the field they play in is at the old Chicago Public Housing Project known as the Henry Horner Homes, nicknamed the Hornet, because the buildings resembled hornet nests. The Henry Horner Homes were demolished in 2008, but the movie is from 2001, so the buildings were still there at the time. Though that was the year the demolishing began.

I first heard about the Henry Horner Homes from the book There Are No Children Here: The Story of Two Boys Growing Up in the Other America, by Alex Kotlowitz, which I read in high school. It was a non-fiction book and the story really stuck with me. The Hornet was a terrible place to live and kids who grew up there saw so much hell that many did not expect to reach adulthood.

So that was what really hit home for me in Hardball. The movie didn’t sugarcoat the life. It showed the fear the kids felt, how they were desperate to get home before it got dark and what living conditions were like inside the buildings. Toward the end, two brothers trying to get home were caught in the middle of a gang fight. The younger of the brothers was hit by a stray bullet and died in the older brother’s arms. That was life at the Henry Horner Homes.

So, while the movie has much comedy, it has a harsh side to it too. It’ll leave you thinking about those living in ghettos across the United States. I’m glad the Hornet is gone and I hope the people who once lived there have found better lives.