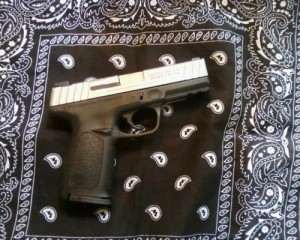 Okay. Yeah. I’m the proud owner of a Smith & Wesson SD9 VE. I’ve heard that a lot of people consider this pistol to be junk, but I don’t see that it is. Faulty trigger, they’ve claimed. What’s wrong with the trigger? It seems fine to me. It functions just right, far as I can tell. Some have said they hated the gun for other reasons, but whatever those reasons are, I’ve come to love my SD9 VE and I know people who also love the SD9 VE as well its twin, the SD40 VE.

Not everyone agrees that any particular pistol is good, so if you don’t like the SD9, that’s fine. But me, personally, I think it’s a great gun, very reliable. The SD9 VE holds 16+1 rounds. That’s a nice load to have if you ever find yourself in a situation where you have to defend yourself from more than one criminally intent person. I guess such a circumstance is rare, but it could happen, you never know.

Okay, so, I love my SD9 and I find it to be a great pistol. But I’ll be honest, when I first got it, I wasn’t so sure. I took it out of the box and went out to shoot it. The first problem I had was loading the magazine. I had so much trouble putting the first bullet in and after I managed to get the bullets in, I couldn’t fill the magazine. It’s a 16-round magazine, but I could only fit fifteen rounds in it. After so many failed attempts to get that sixteenth round in, I decided that this was a flaw Smith & Wesson needed to address, that the magazines did not actually hold sixteen rounds as Smith & Wesson claimed.

So, with fifteen rounds in the mag, I decided it was time to do some target shooting. I put a few rounds through the pipe and then got my first jam. It went on like that for a while, a jam for every few shots. I was really beginning to have doubts about the quality of the gun.

But you know what? All that was just the break-in period. As I continued to use the gun, it began to function better. The issue with the magazines not holding the sixteen rounds that they were supposed to was just that the springs needed to get some usage. Eventually it was easier to load the magazines and fit sixteen rounds in them.

I figured out later that when you buy a brand new gun, it’s best to oil it before taking it out to shoot for the first time. Oiling the gun before the first shooting will likely make the break-in period more pleasant. It’s a practice I stick to now.

So, for me, the SD9 VE turned out to be a very good pistol and I’m glad I bought it.