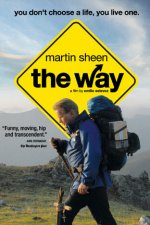 How long ago was it since I first discovered The Way on Netflix? Two years ago? I guess it wasn’t more than two years. Since the initial viewing, I had watched it several more times. It’s just one of those movies that entered my heart and will stay there. Anyone who hasn’t seen The Way, I recommend it highly.

Daniel quit medical school so he could travel the world. Tom is not a big supporter of this idea, but he accepts it  A couple years go by and Tom gets a phone call from a French police officer who informs him that Daniel was killed in a storm while hiking.

Tom goes to France with the intention of collecting Daniel’s body and heading straight home to bury it. But while Tom is in France, he learns about the journey Daniel was on when he died. Tom decides he and Daniel will finish the journey