And Buddy turned six this month. 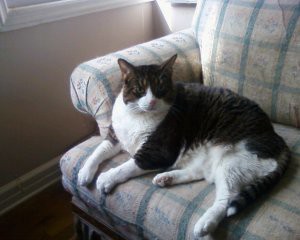 That’s right. My cat, Buddy, he’s six years old. I don’t know if I’m one of those people who keeps track of the ages of their pets, but I got Buddy’s age pinned down. I’ve been living on my own since I was twenty-three  and I’ve only had three pets in all that time.

I got Buddy in September 2009 when he was still a kitten. I remember how small he was. But he quickly grew into the big purring monster that he is now. I mean he’s huge and quite heavy. He weighs more than my dog. Though he lies around the house a lot, he’s healthy and happy. He’s the best cat ever.

Buddy”s my buddy. Though it looks like he was annoyed with me taking his picture this morning.