Yes, I have tattoos and I’m afraid of needles 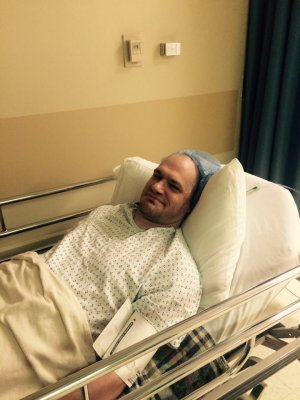 My year started off a bit rough. I had a hernia that was getting worse and needed to be fixed. Went to see my doctor about it and he referred me to a surgeon, who I saw the next day. Two days later I was at the hospital for the operation.

This isn’t the first time I’ve had surgery. I had surgery for another hernia twelve years ago and I’ve had three different surgeries on my eyes when I was a kid. But even so, surgery isn’t something too many people get used to.

I admit, I’m always pretty scared before going into surgery, and I don’t like being poked with needles. That shit hurts. I yowl every time. It doesn’t matter if they’re injecting me with something, drawing my blood or inserting IVs. Those needles are dreadful. I deal with pain and fear by cussing and swearing, which is what I did.

So, I was wheeled into the operation room. I joked with a nurse about being on M*A*S*H, and then I woke up in the recovery room.

Oh, there was pain. That’s the worst part about surgery. Being in terrible pain afterward. But the pain was forgotten when the nurse showed me that there was a catheter hooked up to me and a plastic bag strapped to my leg. I freaked out. Last time I had surgery, there was nothing like that left on me.

I immediately thought something had gone very wrong during the operation and I started asking questions. But the nurses in the recovery room didn’t have the answers. At one point one of the doctors who was part of the operation came in and asked how I was doing. “I’m just freaking out,” was my reply. He did try to explain why there was a catheter in me, but I couldn’t hear him very well.

That fucking thing was a nightmare. I’m terribly sensitive about things like that. Just looking at it gave me the creeps. I don’t care how many times people told  me it was a plastic tube and not a needle, it felt like a needle.

I spent the first couple days at my mom and dad’s house, mostly staying in the recliner in the living room. The pain from the surgery was constant, but it was the catheter that caused the most discomfort.

On my first morning after the surgery, I woke up around 6 AM screaming in pain. I was feeling constant stabs around the surgery area. Later that day I went back to the hospital because the pain was too much.

I stayed at mom and dad’s for two days. I came home on the third day. I spent most of my time on the couch watching my old DvDs.  Young Guns, Jakob the Liar, The Bourne Identity, Amos & Andrew and so on.

I had the stupid catheter in me for a week. It was horrible, and I said at least twice that the damn thing was going to cause an infection. I hated that thing. Who wouldn’t?

I was terrified when I went in to have the catheter taken out. In the examination room, I explained to the nurse that I was afraid there would be a problem when she took it out, but at the same time I wanted to get that stupid thing out of me as soon as possible.

Before the nurse pulled it out, I asked her if it was going to hurt. She said, “Usually it doesn’t.” While I hoped I would be one of the usual, I really didn’t think I would be. I was reduced to a whimpering mass as the nurse prepared. When she pulled the catheter out, I yelled so loud everyone in the building heard me.

My mom was in the hallway. She told me later that the doctor walked up to her and asked if I was a young guy. She told him, “Yes, he’s 38.” The doctor said, “Young guys are usually more sensitive.” At 38, I don’t really think I qualify as a young guy anymore, but I am sensitive to catheter removals. That was horrible. I hope I never have to live through that again.

When the doctor entered the examination room, I was sitting in the chair hugging myself. He asked how I was doing and I said I was in pain. He checked me out and said everything looked right. The removal went well and there was, thankfully, no blood. I finished up there and left.

The next day I posted this on Facebook: “I’m not feeling well today. I have a headache, I’m dizzy and I sweated all night. And since the surgery, I’ve been dropping things a lot. Last night I dropped and broke a cup my grandma gave me for Christmas. I think it’s the medicine that’s causing all this and I decided not to take it anymore.”

The comments I got suggested that it could be an infection and fever. I agreed. I went to see my doctor a couple hours later. He looked me over for a few minutes, and then sent me to the hospital.

I spent hours lying on a bed in an examination room while they ran tests. Doctors and nurses were in and out. I was taken out for some x-rays, and then brought back. An IV was plugged into my left arm and I had to keep that arm straight.

Because of that, I couldn’t text on my phone anymore. Texting was too difficult to do with one hand and with two hands I had to hold the phone so far away I couldn’t see what I was doing. Before they put the IV in, I’d been passing the time texting with a friend.

The doctor overseeing my case decided it was time to take the tape off the three incision areas on my lower stomach. The tape had been there since I got out of surgery the week before. The doctor instructed while the nurse did the work.

That was extremely painful. I yelled and cussed loudly the whole time. The nurse said it was just tape, but it felt like she was digging needles out of my stomach. I guess it took between five and ten minutes for her to get all the tape off. She apologized for causing me so much pain. I told her, “That’s okay.” I apologized for swearing. She told me, “That’s okay.”

My mom had been outside the room. She came in and asked if I was okay. My response was, “That was bad.” I thought I was bleeding, but the nurse said there was no blood.

After a while, a doctor came in with my test results. He said it was an infection caused by the catheter and I would have to stay the night at the hospital to make sure the infection didn’t get worse. They wheeled my bed out of the examination room, through the maze of corridors and up a couple floors to the room where I would spend the night.

I had a roommate, but I couldn’t see him because there was a curtain between us. I guess his situation was worse than mine and I don’t think he was able to walk. He had quite a few people coming in to visit and they talked a lot. He also conversed with the nurses quite a bit. 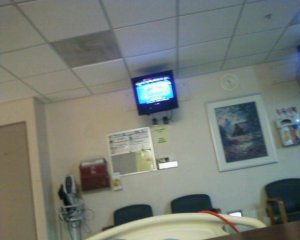 The TV was a tiny little thing about a mile away. Most of the time there wasn’t anything worth watching, but I did find basketball games here and there.

That night they wouldn’t let me eat anything solid. Everything they fed me was liquid. Nurses would come in, take my temperature, check my blood pressure and draw blood. Every time they were about to stick a needle in one of my arms, I’d worry that they would damage my tattoos, but they never did put the needles through the tattoos. 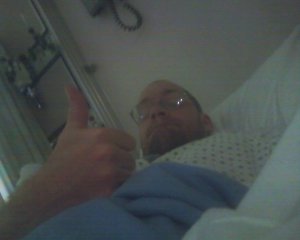 I slept. The fever was gone the next morning. Breakfast was scrambled eggs and some potato stuff. I found out they were going to let me go after lunch. Lunch was a chicken salad sandwich and soup. It was all right.

A few days later, I had my follow up appointment with the surgeon. Everything checked out. After seeing the surgeon, my doctor wanted to see me.

Well, the reason my doctor wanted to see me was the x-ray I had at the hospital showed there was some scarring in my lungs. He wanted me to go back to the hospital in a week or so and have that checked out. He also wanted the hospital to run a test to make sure the infection from the catheter was gone.

I had those tests over a week ago. I haven’t heard anything since, so I guess all is well. If there was a problem, I would have heard from my doctor.

All of the doctors and nurses I dealt with during all this were awesome, even the cleaning lady at the hospital was helpful. Wish I knew all their names, but I’m hard of hearing and I missed a lot of what was said to me. The hospital was McLaren Lapeer Region.