Author’s Guide to Marketing With Teeth, by Michael Knost 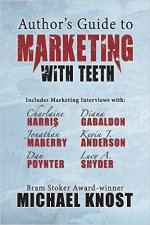 I don’t have a novel of my own coming out, but I’ve been shopping one around to agents and I’m almost done cleaning up another novel.  Not to mention a novel that I’m writing and a couple others that are finished rough drafts. Point is, I’ve been pretty productive in the last few years. I’ve been thinking about what I would do if one of my novels is published, because I want to be prepared ahead of time.

I found Michael Knost‘s Author’s Guide to Marketing With Teeth very helpful, and very encouraging. Also, it wasn’t boring. The book held my interest and was quite entertaining in places. I laughed out loud at the part where Mike was running in his astronaut Halloween costume. You’ll have to read the book if you want to know what that was all about.

I’m hard of hearing, to the degree that I can barely understand anyone when communicating with them in person. Often we just have to give up, because I can’t hear them. This is why I’ve been uncomfortable with the idea of doing book signings (I have been asked to participate in a book signing event for an anthology I’m published in.) and TV or radio interviews, or anything that would require me to hear what people are saying.

I felt like I was limited, that there are things that I just would not be able to do to promote my work. Although Mike didn’t have anything about hard of hearing or deaf people in Marketing With Teeth, some of the things he said has me considering some possibilities. I guess he opened my mind to the bigger picture.

As I read, I came up with ideas on how I could make book signings, radio and TV interviews, etc,  work out for me and everyone involved. I want to tell you all about these ideas, but I’ll do it in a separate blog entry.

The book covered things that I otherwise would not have thought of. I really liked the idea of letting my fictional characters write blog entries. That sounds like fun.  I might start doing that. It would give me more topics to blog about. I agree that blogging is a good way to build a platform. I try to keep a steady flow of entries, but often I just don’t know what to blog about.

In his interview, Kevin J. Anderson said he likes to talk about his work in progress. Talking about my work in progress is something I’ve always been uncertain about. On one hand, I feel that I want to, that it could be fun and spark interest in the project, as well as give me more topics to blog about. But on the other hand, I was never sure it was a good idea. In the last few years, I’ve been saying very little about my work in progress, refusing to even give the titles. Now I think I’m going to start opening up a bit about my projects.

And then there was Jonathan Maberry. Like me, Maberry writes several genres, so I felt that his advice was most appealing to me. He also admitted that he used to be  a negative person, which was one of my flaws too, and I still fall into that trap occasionally.

Mike asked Maberry, “What marketing mistakes have you made?” Maberry’s answer made me think I’m going to be okay. I’ve made some mistakes over the years. While they were not necessarily marketing mistakes, I often worry that my mistakes will effect my career. It was comforting to hear that Jonathan Maberry had made loads of mistakes himself and still managed to rise.

Also, Mike answered a question for me. One of my ideas is I would use book trailers to promote my work. However, I didn’t know how to go about having trailers made and what to expect. I’ve poked around the internet a bit, but never found very satisfying answers. Mike has had some pretty cool trailers made for his books and he would know what comes with the territory. I appreciate him answering my question. It was a well-detailed and satisfying answer.

I’ll keep Author’s Guide to Marketing With Teeth on hand so I can look to it when I need to.