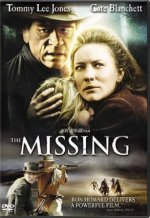 The Missing. Yeah, an impressive movie. If you haven’t seen it, it’s one I recommend. It stars Tommy Lee Jones and Cate Blanchett.

Samuel had run off when Maggie was young and Maggie does not wish to reconnect with him. But he turns up at her home because he needs a doctor. Maggie tends to him, and then runs him off her land.

Later, Brake, the man Maggie loves (I don’t think they were married) and her two daughters, Lilly and Dot, leave for the fair. Maggie stays home, until she sees one of the ranch’s horses that Brake and her daughters had taken with them. The horse is riderless and appears to be frightened.

Maggie figures out that something had happened to Brake and her daughters. She rides off to find them. She arrives at the place where they had camped and finds Brake dead. And then she sees Dot who had hidden. Dot informs Maggie that men had taken Lilly.

Maggie sets off to find Lilly, enlisting the help of Samuel. Along the way they encounter Chiricahua Apaches who Samuel had lived with and who agree to help rescue Lilly and other girls who were taken.

I first watched this movie a couple years ago. A few weeks ago, I watched it again with my friend Kathy who is a citizen of the Seminole Nation of Oklahoma and has ancestors from various tribes. She’s very involved in Native American culture, i.e., she knows stuff. Her dad is a famed Native artist who once served as chief of his tribe. So, I think she knows what she’s talking about.

Kathy felt that the people who made this movie did a very good job in holding true to Native culture and beliefs. I guess there are a lot of movies that did not get it right, but this one did.

Hats off to Ron Howard and everyone involved in the making of this movie.