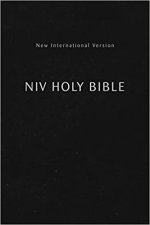 I’m relieved to have finally made it to the end of the Bible. If I had known it would take me almost three years to finish the Bible, I never would have started it. I know exactly when I started reading the Bible. August 20, 2019, right after I posted my review of Eric T. Reynold’s novel, The Artifacts.

It has long been my practice to not pick up another book until I’ve finished the book I’m reading and have posted a review of it. Holding true to my practice meant that for three years, the Bible was the only book I could read.

I’m exhausted with the Bible. I don’t really want to write a long review of it. I want to just post a quick note that says, “I read it, but I don’t agree with much that it says.” I’m regretting that I told people at one time and another to wait for my review, that I would try to outline all the problems I’m having with the Bible in my review.

So, I’m going to try sticking with the plan that I wish I had never made.

This time, I read the Bible carefully, and slowly, and I often turned back the pages to read something again and try to understand it better.

This time, I read the Bible because I wanted to know what it really said. I also wanted to see if the Bible could give me reason to hold on to the faith that barely existed in me.

The Bible did not strengthen my faith. It pushed me farther away. Finally, I decided that I’m done with Christianity.

Some of you probably want to say something along the lines of, “It’s not a matter of whether you agree with what the Bible says or not. These are the rules that God has set for us and He knows what is best.”

Most of you haven’t even read the entire Bible. While reading the Bible, I had mentioned here and there that I was reading it. People would tell me to read some chapter or another.

Is that all you do? Just read certain chapters of the Bible? Many of you have admitted that you have never, not once in your lives, read the entire Bible. If you read the Bible from cover to cover, you might see that the chapters you think are special are actually meaningless.

God is love? Not the one in the Christian Bible. The Christian God is a horrible, cruel being. He is a passive-aggressive control freak.

“But that was the Old Testament. In the New Testament, Jesus teaches us differently, how to love one another and turn the other cheek.”

While I was in the Old Testament, I kept hoping to see a big turnaround when I got to the New Testament. The Old Testament is full of hate. Hate for your fellow man who doesn’t follow the same faith that you do. It made me want to tell people who follow this crap that they should be ashamed of themselves.

But I kept in mind what some people have said, that in the New Testament, Jesus is going to turn the teachings of the Old Testament around.

After the long, slow crawl through the Old Testament, I finally reached the New Testament. Jesus was all right in some places. But in other places, I thought he was an asshole. Jesus seems to really like talking down to people.

Sometimes I wondered if it was just the way the writers of those chapters made him out to be, because in other chapters, he sounded like the kindest, most caring dude you’ll ever meet.

Part of me doesn’t want to bad mouth the Bible and Christianity. I wanted to come at this with more respect, whether I believe or not, but after reading all of this, all I really want to say is, “This is ridiculous.”

The Bible can’t even agree with itself. Here’s an example; in many places throughout the Bible, the drinking of alcohol is described as a sin. When the wedding guests, who were already drunk, ran out of wine, Jesus turned water into wine so the drunk wedding guests could continue drinking.

So much in the Bible doesn’t make sense. Passages conflict with other passages. How does anyone know what to do with this stuff? People who claim to follow every word of the Bible couldn’t honestly, realistically, possibly do that.

I have so many problems with the Bible. I tried taking notes, to keep track of all the problems I was having. But the notes became overwhelming and I chucked them. So, I’ll just recall what I can as best I can.

One problem, something I could never understand, and I remember being confused about this part when I read the Bible as a kid. It’s one of Moses’s chapters. Moses is on his way back to Egypt, doing what God commanded. One night God comes to kill Moses. Why? Moses was doing what God commanded, why did God come to kill him? I could never understand that.

I turned back the pages and read them again, to see if I missed something, and I didn’t see what I’m missing. God just decided for no reason that he’s going to kill Moses.

But what I find most interesting about that scene is how Moses’s wife put herself between God and her husband and made God back off.

God, the Divine, the All-Knowing, the All-Powerful, is made to reconsider his decision by a mere mortal? Doesn’t make God look very divine, it makes him look indecisive and certainly not all-knowing and all-powerful. It makes God look like he doesn’t really know what the hell he’s doing.

How many other times are there in the Bible when God was bent on doing something and someone talked him out of it? A few, I recall. What’s wrong with this picture? Why is God letting mortals deter his decisions?

Then there is the issue of who the Lord considers to be righteous. Twice in the Bible, there’s a tale, set at different times, but is similar. It involves a mob surrounding a house and demanding the homeowner send out his guests to be raped by the mob.

The first time this happened, the mob refused the offer of the daughters and insisted the guests be sent out. The second time, a daughter was shoved out the door and she was raped by the mob, over and over again, until she died.

These men who offered their daughters to the mob are seen as righteous in the eyes of the Lord.

Yes, I heard the reasoning behind this. That it was just an example of how you’re to treat your guests while they’re under your roof and yah, yah, yah. I don’t see how protecting your guests means you should offer your daughters in their place.

The idea that you need to be a Christian to be a good person, to be rewarded with a peaceful afterlife, is pretty stupid. There’s this threat of Hell. It’s like saying, “If you don’t hold true to the Christian faith, you are damned and will suffer in Hell for eternity.”

You know who uses threats to get people to stay in line? Dictators. The Bible also expresses that you should not question the faith, that you should follow unquestioningly, or else you are not true to the faith. That’s another tactic of dictators. Follow the leader blindly, ask no questions, don’t think for yourself.

All through the Bible, it’s implied that you can’t be a good person unless you follow the teachings of the Bible. That’s not true. Any intelligent person should know that.

Then there’s the great Biblical promotion of genocide. There are places in the Bible where it’s suggested that it is okay for those who follow to slaughter those who do not.

According to the Bible, slavery is acceptable.

Does anyone ever wonder why Jesus can’t give a straight answer to anything? Seems like every time someone asks him something, he breaks out some parable that you’re supposed to figure out the meaning of.

Why is it that almost every time the Bible talks about a person with disabilities, that person is described as having demons that need to be ejected from him?

Later in the Bible, someone is telling about his visons that supposedly came from God. In these visions, Earth is described as having four corners. I know that at the time the Bible was written, people believed Earth was flat. But if the Christian God is real, he would surely know that Earth is round. Why is God giving this person visions of an Earth that has four corners?

So, what is the Bible?

I think the Bible is a lot of things. I think it’s a mixture of ideas, theories, true history, pure fiction, exaggerations, fantasies, folklore, metaphors.

I think Jesus maybe really did exist, but that the Biblical stories about him are mostly exaggerations and tall tales. If Jesus really existed, he was likely nothing more than another person who fought for the betterment of humanity, much like Martin Luther King Jr., Mahatma Gandhi and Nelson Mandela. Surely, there were such people in Biblical times who tried to make a difference and who were assassinated by people who felt threatened by them.