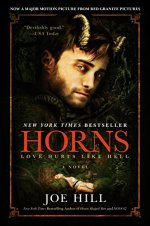 Heart-Shaped Box and Horns are two completely different stories, but both were deep in music. Judas Coyne, the rock star who bled all over the pages in Heart-Shaped Box is criticized by a character in Horns. I guess not everyone is impressed with Jude’s music.

I like when writers pull that trick, mention a character from a completely different, unconnected story. It makes that character feel more real, alive, and it makes me feel like I’m being reminded of an old friend.

Okay, so… Horns. It’s a rather strange story, dipped in dark fantasy. Ig Perrish wakes up after a night of drunken raging and discovers he has grown horns. Now everyone is telling him their darkest secrets. Because of this, Ig starts to hear the truth of what happened to his girlfriend, Merrin, a year ago.

As usual, a good read and entertaining, even though the story touches on a highly sensitive subject. Hill showed very clearly how brutal and ugly rape is. I was uncomfortable as I read the scene where it happened.

2 Thoughts to “Horns, by Joe Hill”