I did it again. After several unsuccessful years, I shot my first deer last year. At around 6:30 PM on Saturday, I shot my second deer. A doe. It was not a huge doe, but I guess it was a reasonable size. I like that I got it only eight days into the season. I had seen four other deer before the doe I shot came along. In the past years, I didn’t see anything until mid-November. I think I’m getting better at hunting.

On October 8, I saw two deer before 6:00 PM, but I passed on them because they were too young. At around 6:30 PM, I looked up from the Kindle book I’m reading, which is Joe Hill’s Heart Shaped Box. There it was, a deer that was bigger than the ones I’d seen previously. I put down my phone and picked up my crossbow.

This was the first time I had the opportunity to shoot a deer with my crossbow. Because the crossbow is bigger and wider than the shotgun, it’s a challenge aiming it through the window. If I had bumped the crossbow into the wood, I probably would’ve scared the deer off.

I managed to not bump into the wood, but I did have a lot of trouble finding the deer on the scope. I had to keep shifting myself in my chair and raising myself higher, but finally I got the crosshairs on the deer and pulled the trigger.

There was that thud that crossbows make when shot. The deer made no sound as it ran west. I climbed out of my shack and attempted to find a blood trail. But with my poor eyesight, I doubt I’ll ever be able to track down a deer by myself.

I sent my dad a text and while I waited for him, I found the arrow sticking out of the ground. I thought that meant I missed the deer. But when my dad got there, he saw from ten feet away what I couldn’t see from a foot away. As I bent down to pull the arrow out of the ground, my dad said, “Robert, that arrow has blood on it.”

Oh, neat. I didn’t miss. The arrow went right through it. Crossbows are powerful. My dad found blood every few feet. It didn’t take us long to find the deer. The deer was lying in weeds about fifty yards from where it was shot, and it was already dead.

I still have a buck tag, so I’m going to try getting a buck. I might get another antlerless tag at some point, but not right now.

Just got the meat from Deer #2 yesterday. 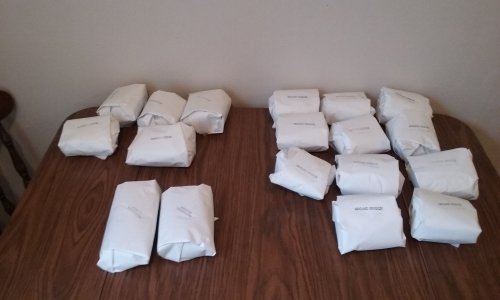