She Wrote on Clay, by Shirley Graetz 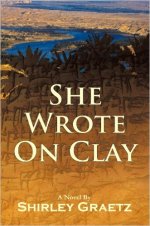 She Wrote on Clay, by Shirley Graetz, is a historical novel. The story is set in Sippar, which was a city twenty miles southwest of where Baghdad is today, and takes places centuries Before Christ.

At the beginning, Iltani is a young girl who wants to be a scribe. Her father is a respected scribe and she is anxious to follow in his footsteps. In order to become a scribe, she needs to go to the gagû where she will learn the art and become a naditu.

So, Iltani gets to the gagû and settles in with her aunt who is a wealthy naditu. Iltani begins her education, but soon runs into trouble.

The story spans over several years. Iltani meets many challenges and secrets are revealed.

I thought it was good read. I looked up some things mentioned in the book because I wanted to know more about them. When I was younger, I wanted to be an archaeologist. Though that didn’t pan out, I still have an interest in ancient civilizations and I feel that this book put me in one.