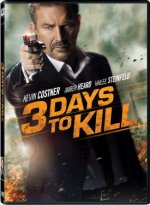 3 Days to Kill is another one of those “My dad is a badass” action thrillers that seem to be common these days, but this time it’s Kevin Costner’s turn to be the badass dad. Costner is Ethan Renner, a badass CIA… um… hitman? A mission goes wrong and there’s a whole crapload of shooting, with Ethan Renner making some pretty awesome moves while dealing with a medical condition that puts him on the ground like he’s having a heart attack.

Afterward, Ethan returns to his home in Paris, France, where he attempts to reconnect with his teenage daughter, who is angry with him because he wasn’t around for years. Eventually Ethan takes on the real fatherly role and bails his daughter out of bad situations in totally badassery ways.