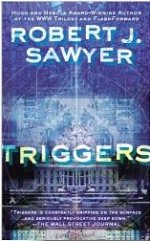 Triggers, by Robert J. Sawyer, has clear and easy to understand prose. The story just kind of flowed to me. It was a fun read. The characters were believable, to the point where some of them made me so mad I wanted to smack them. There were times when I couldn’t help comparing Agent Susan Dawson to Cersei Lannister.

All of the characters were well done, but my favorite was Kadeem Adams. Kadeem stole the scene every time he was on stage. Although he was a point-of-view character, the spotlight wasn’t on him that much. But whenever the spotlight was on Kadeem, his performance was impressive as hell. I loved the things he said, the way he said them, the actions he took and how his personality really shined through.