This is the house I lived in when I was kid, all done up in Sims 3. I lived there from the time I was a toddler until I was thirteen. It’s the setting of the Where I Want to Be song that I posted some weeks ago. Not everything measures up quite right, but it’s close enough. The outside siding had been yellow instead of white, but the Sims didn’t have a yellow siding that looked right. The furniture is placed as I remember it best, though I might be wrong about some thing.

The back. The deck and patio were not there in the beginning. I remember helping my dad build the deck. I’m guessing I was around five. The patio came soon after the deck, My brother, my sister and I had our handprints in the corner that is not touching the deck or the house. 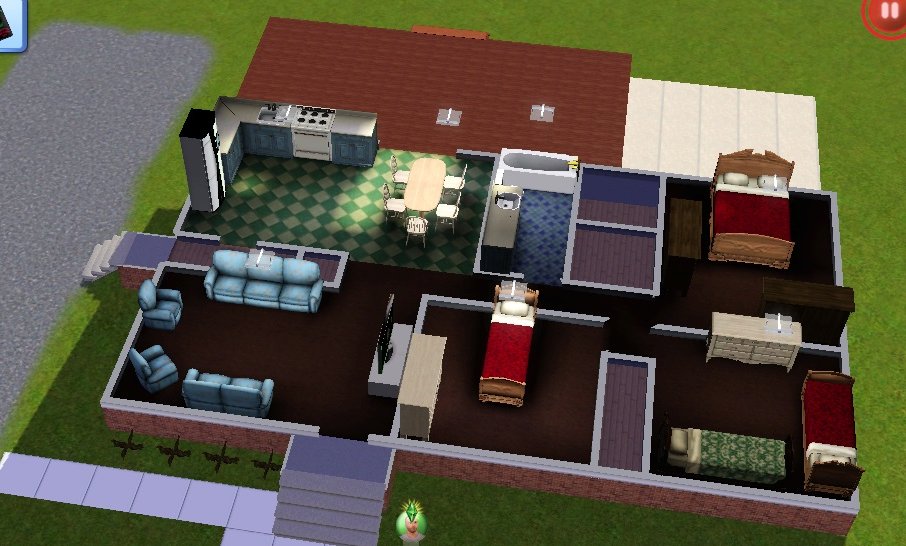 I chose brightly colored furniture just so it would show up better, but much of our furniture was dark colored. The walled-in spaces between the rooms were closets. And that door by the refrigerator, that was where the basement stairs were, but the Sims were being a pain in the ass about fitting the stairs in there, so I left them out. 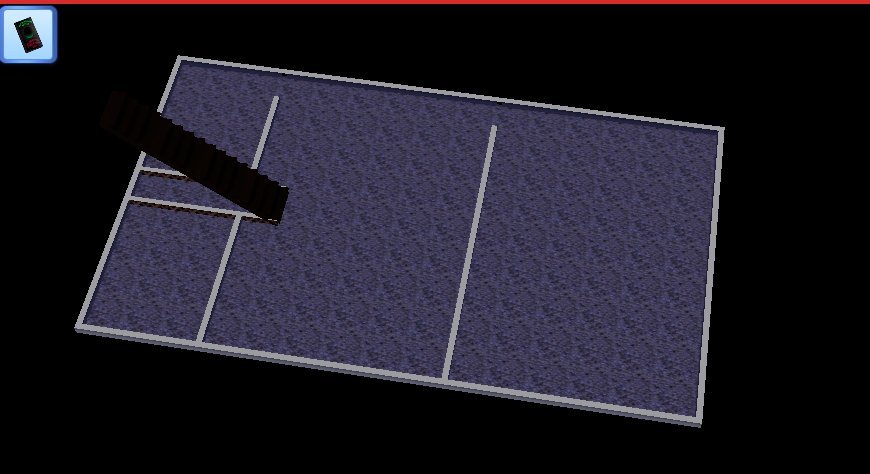 The basement. The wall in the middle wasn’t always there. My dad built that when I was about eight or nine so he could have a band room separated from the rest of the basement. The room behind the stairs, that was where the washer and dryer were. There was also an old junked up motorcycle leftover from my dad’s teen years, and an old coat hanging on the wall, dirty, dusty, and infested with spiders. The space behind the stairs was more or less a place to store junk.

We built the garage when I was around eight. I remember helping my dad with this too. The space between the garage and the house was a room where my mom had her hair salon. I wanted to include that room, but the Sims wouldn’t let me make a wall from a ground level building to a building on a foundation, so that’s another thing I was forced to leave out. So, my mom had a hair salon and my dad did a lot of auto body repairs in the garage. 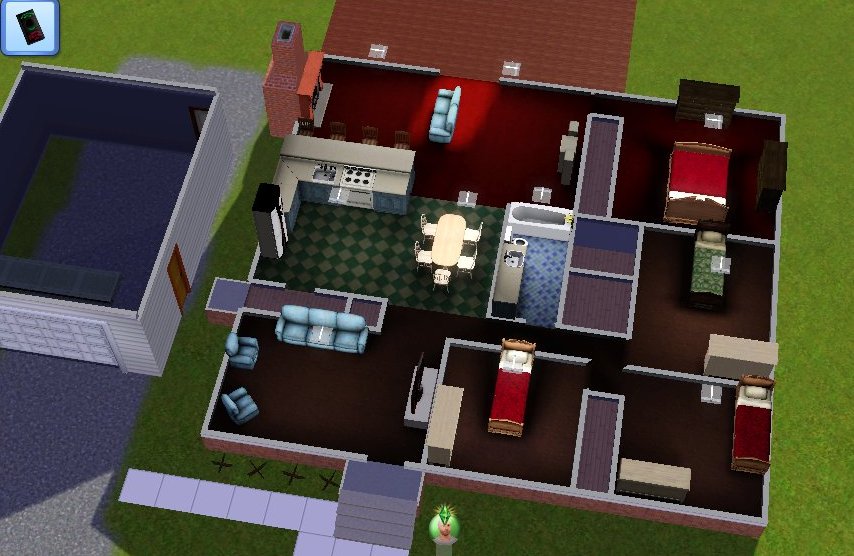 When I was around ten, we added onto the house. We moved the deck back, built a family room with a fireplace and a bar. We also built a larger bedroom for my parents. My brother moved into their old bedroom and I had a room to myself.

The house was on an acre of property. There was a hill in the backyard. The bottom of the hill was where we rode our motorcycles. The woods were behind the property. There were many other houses in the neighborhood like ours.

It’s been a long road.
So many days have gone by.
There are times I will always remember,
And I still have the old pictures.
I’m sitting here thinking
How I’d like to be there again.

When I was a kid we had a house
At the end of Big Buck Lane.
The world wasn’t much more
Than our neighborhood,
But that was all we needed.
In the spring and summertime
We’d ride our bikes where we wanted,
As long as we stayed within our limits.
It was just three short streets,
But I had felt free.

Sometimes we’d sit on the grass
By the basement window
And listen to mom and dad’s
Band practice after sunset.
And I remember playing basketball
On the patio beside the deck.
We had no hoop to shoot for,
But still we managed to score.
Life wasn’t always easy,
But I had felt at peace.

It was a time when I was pure at heart
And life was new and full of adventure.
The trails in the woods were haunted war paths
And the sandpit had buried treasure.

Our weapons were cap guns
And plastic bows and arrows.
Sometimes swords and knives
Were the juicer choice.
Before Nintendo came into our home
And motorcycles were what we rode,
Before we got into bigger things,
That’s where I want to be.