Why do I hunt? 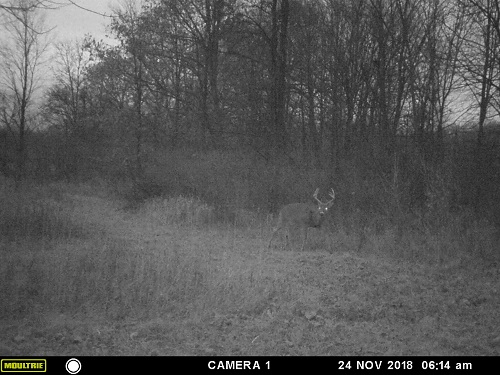 I blogged about this buck Saturday night. Adele commented on Facebook, saying “Yes, he’s a beautiful animal. Why not let him live?”

Peggy explained that the buck could feed me for a year, and if I or someone else doesn’t get him, he will die anyway.

That is one reason, but there’s more to it than that. I’d just come off a nine hour hunt and I was too tired to write last night. Since my answer is long, I’m going to make it a blog entry.

Yes, one reason I hunt is for the meat. I love venison. I’m not saying I wouldn’t eat store-bought deer meat, but I find that hunting saves me money.

Now that buck in the picture, he’s huge. He would yield a lot of meat. He might feed me for a year, or six months or three months, depending on how much of him I eat each day. Yes, he is a beautiful animal. He’s magnificent and majestic. I’m betting he’s the king of deer in my area. He probably has respect from all the deer for miles. I’m thrilled that he even set foot on my hunting ground. But if I ever have the opportunity to shoot him, I’m not going to pass it up.

I appreciate the vote of confidence that I might actually shoot this majestic buck. That buck in the picture, he didn’t get that big by being a fool. He’s been dodging hunters his whole life. Every hunter dreams of shooting a buck like that. Very few ever accomplish that feat. Most of us are lucky if we ever get a buck at all. If the best hunters haven’t shot that buck yet, what are the odds that I would shoot him?

I’m not an expert hunter. I still think of myself as a beginner. I’ve killed three antlerless deer.

Peggy is right. If I or someone else doesn’t get that buck, he’ll die anyway. I reckon that’s what will happen. He’ll kneel over and die of old age, and will probably feed the coyote when he does.

But is there any deer that you wouldn’t say is a beautiful animal and suggest I let live? I can’t help thinking that the better question would be “Why do you hunt?” To that, I don’t have a satisfying answer. I can’t really explain to myself why I love hunting.

I can tell you that deer hunting is one of my passions. I look forward to deer season all year and I get excited when it finally arrives. I enjoy deer hunting so much that I often don’t want to come in when hunting hours are over, no matter how cold it is. I wish I could hunt all night.

I can tell you what I like about hunting. Getting a supply of meat at a lower cost is one benefit. But it’s more than that. I guess the thing I like most is the challenge. Outsmarting a wild animal is not easy.

If I ever got a buck like the one in the picture, I would be amazed that I managed to do that. That buck is a wise one. He doesn’t slip up much.