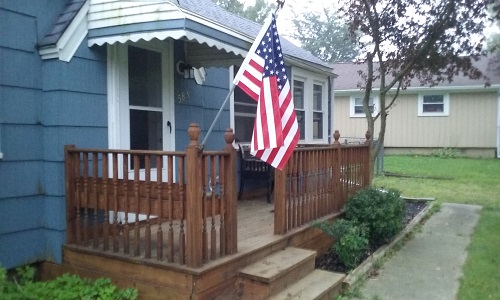 There was always a mount on my porch, but I didn’t have a pole for it until last night.

When I went out this morning to put the flag up, just as I was stepping off the porch, I heard a bark. I looked over and there’s a dog on my sidewalk. It wasn’t a German Shepherd, but it was about the same size as one. I don’t know what the dog’s intentions were, but it was approaching fast and it scared me.

I backed up into the house. The dog came right up onto the porch. It looked like it was about to lunge at me as I was closing the door. It was on my porch for about a minute, and then it took off. I guess one of the neighbors called it.

I wonder what would have happened if I had already been off the porch and taking a picture of the flag. I had my .380 in my waistband, but I would rather not have to use it.

Big dogs roaming the neighborhood are one of the reasons I’m rarely outside without a pistol. A few years ago, when I went out to get my garbage can, there were two full-grown Great Danes in my front yard barking at me like I had just entered their territory and was threatening their cubs.