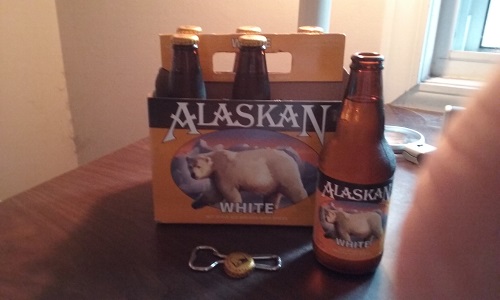 My cousin Anthony lives in Alaska and probably gets this beer at a lower price than the rest of us. I’ve been looking for it since he recommended it. Partly because trying different beers is a hobby of mine and partly because the name “Alaskan White” makes me think of beer coming fresh from a pile of snow in Alaska, which makes it right for hot summer days.

Finding Alaskan White isn’t easy. Not very many stores in Michigan sell it. Today I was on the Alaskan Brewing Co. website and they have a feature for locating stores that sell their beers. I checked that out and saw that there are two stores in Davison that sell Alaskan White.

My dad and I went into Davison to pick up food. We went by the A&B on Davison Road, about a mile or two west of State Road, and I bought their last six pack of Alaskan White. Now I’m home. I already had one and I’m almost done with my second.

Overall, it tastes like beer, but there’s more to it than that. It’s a smooth drink and there’s an icy flavor to it. I recommend you try it to see what I mean. It’s good stuff. If you can find it.

I finished my second. Opening my third now.