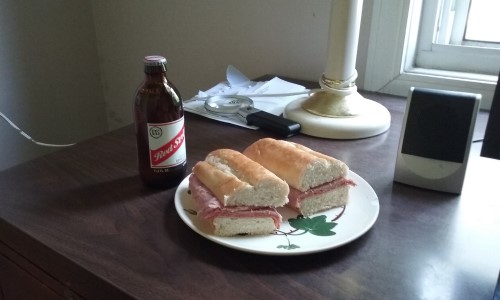 Been outside since 7 this morning, busting my ass on a landscaping project I’ve been wanting to do since last year. But more about that  later.

I was hungry and figured I could use a beer. So, I put in an order on Shipt.com. for an Italian sub and a six-pack of Jamaica’s Red Stripe.

Well, Red Stripe comes in funny little bottles, but it’s fine beer. So, that’s another so-called nasty, dreadfully disgusting beer that gets my approval, and I still haven’t met a beer I disliked.

Come on, guys, point me to a beer that’s TRULY disgusting. Because, no matter what people claim, I still don’t believe such a beer exists. Prove me wrong! Destroy my religion! Show me a beer that is so nasty, I’ll never drink it again!

Welp, lunchbreak is over. Back to work.