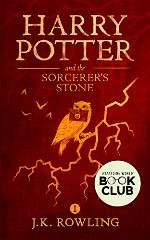 Harry Potter and the Sorcerer’s Stone is the first book in J.K. Rowling‘s Harry Potter series. Harry’s parents died when he was a year old and he lives with his aunt and uncle who are cruel to him. When he reaches the right age, he enrolls in Hogwarts School of Witchcraft and Wizardry. At Hogwarts, Harry is happy, but is he safe?

Now that I’ve written something about the Sorcerer’s Stone, I can start the Chamber of Secrets.