I was excited when October rolled up this year. There is deer hunting in September, but I’m not sure if just anyone anywhere can participate. I’m still confused about some of the regulations, like the late firearm season, which runs from December 18 to January 1. I don’t know if it’d be okay to take my shotgun out for the late firearm season, so I just use the bow all through December. And because I don’t know if I’d be allowed to hunt during the early antlerless season, I don’t hunt in September.

I know for a fact that I’m allowed to hunt from October 1 to January 1. So, when Archery Season starts October 1, I’m in. I don’t remember exactly when I started developing a passion for hunting. Was it 2009 or 2010? I was inspired by some of my cousins to take it up, and also the fact that I had this nice pump shotgun since I was 21 and never used it.

My first few seasons were unsuccessful, but I developed a degree of patience and a higher tolerance for cold weather. Also, I came to really love being out there. There’s something comforting about sitting there for hours, listening to wild animals, the wind and nature. Often when it’s time to pack it up and call it a day, I don’t want to go in. I want to stay out there all night and be ready when the sun comes up in the morning. But, I don’t think you can do that. Regulations.

I shot my first deer in November 2015. Since then I’ve been a one-deer-a-year guy. I might have taken more if I’d gotten another doe tag after using the first one, but I’d ride out the rest of the season on the buck tag and I didn’t see any buck.

Earlier this year, I made plans to take any fair-sized doe I saw and do my own butchering. If I could do my own butchering instead of paying a butcher, I might be able to take enough deer to feed me for a year and save a lot of money. But, I never got the stuff I needed. So, I decided instead that I would hold on to my doe tag and try to get a buck first.

That was a stupid idea and I’m never doing it again. I didn’t make it out very much in October and early November. but I saw deer every time I did. I kept passing them up because I wanted something with a rack.

At one point, I think I had a buck in front of me. It looked like it had two antlers that were about four inches long, which would have made it a two-point buck. I have bad eyes, so I’m not positive. I was going to look at it through my crossbow’s scope. When I picked up the bow, I bumped it into something and spooked the deer.

And then firearm season started. I made it out almost every day, but I wasn’t seeing anything. There were no doe or buck. The trail camera kept getting pictures of deer, but they weren’t out there when I was. I regretted passing up all the doe in October and early November.

The trail camera is getting a lot of pictures of bucks this year. There are two-point, four-point, six-point and eight-point bucks. All of them in front of my shack. If I could drive, I would be out there every morning before sunrise and maybe I’d see some buck. I can’t drive, so someone has to give me a ride and that’s usually in the afternoon.

Here’s a couple of the best pictures. 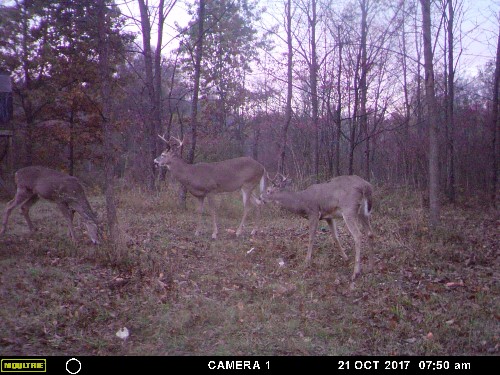 The eight-point and the six-point had a fight. 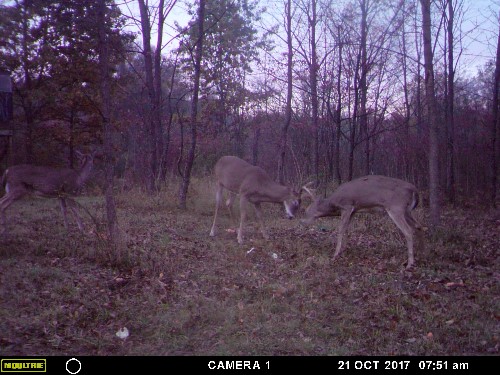 This year, during the firearm season, my dad let me borrow a rifle scope he has. The scope is meant for rifles, but it fits on my shotgun.

The view from my shack used to be limited. I could see no farther than the brush that was across the clearing from the shack. 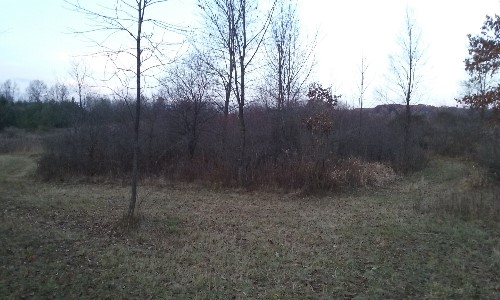 For a couple years now, I’ve wanted to clear up that brush, so I would be able to see all the way to the hill. And this year, because I had this power scope on my gun, I could take longer shots. My dad took the tractor and brush hog out and cleared up the brush.

This is the new view from my shack. 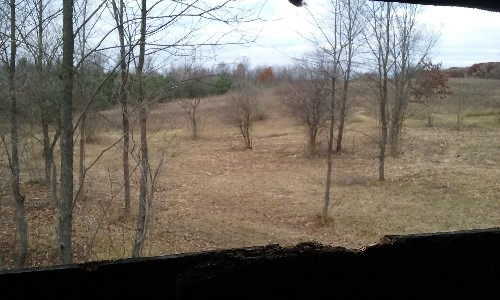 I figure, the deer are less likely to detect me if I’m farther away from them. Plus, I really like the new view.

The trail camera was getting pictures of deer, but I wasn’t seeing any. During firearm season, there’s a lot more people hunting and there’s a lot of shooting. The deer are spooked and being extra careful. I was afraid I wouldn’t get one before the season ended.

On November 29, I was in my shack typing notes on my cellphone for a project I’m working on. I looked up and saw a deer. It was a doe, but bigger than the one I shot last year. This was my chance to see how well I can do with the scope and increased distance. I picked up my shotgun, got my crosshairs on the deer and fired. The round was a hollow-point .12 gauge slug and it knocked the deer down.

I pumped the shotgun to chamber the spare round and took aim. If the deer managed to get back up, I would have to shoot it again, otherwise it might run off. As I was looking through the scope, dark blobs fell across my vision. I looked down and saw blood in my lap.

Yeah, I knew that could happen. That’s the reason I made it a point not to wear my glasses while hunting with the shotgun this year. The ordeal would have been a lot less pleasant if shards of glass were smashed into my eye. I did have the gun’s butt tucked tightly against my shoulder, but I guess as I was adjusting my head so I would have a clearer view through the scope, I’d moved my shoulder back a little from the gun.

See, when I fired that first shot, the recoil drove the scope into my head. But I didn’t realize I was hit until I saw the blood.

I picked up my phone and typed a text to my dad. “I got one. Need he)p. I’m ble3ding.” It was a short message, but it took me a couple minutes to type it because I kept hitting the wrong keys and had to make corrections. While I was doing this, gobs of blood were landing on my phone.

I sent the message, but I didn’t know if it would get through. I don’t get a good signal out there.

I remembered the bandanna in my pocket. I got that out and held it against my head for a minute. I picked up my phone again and typed another message, explaining that the scope hit me in the head. But the second message definitely wasn’t going through.

I didn’t know how bad the wound was. I could’ve put my phone in selfie mode and looked at it, but that didn’t occur to me at the time. After holding the bandanna to my head, the bleeding seemed to have slowed. So, I figured it wasn’t so bad.

My deer was lying where it fell, not moving. I climbed out of my shack and went to look at it. The deer was dead..

My mom and sister pulled up in the truck. My first message made it through to my dad and he figured out what had happened..

I had a little argument with my mom and sister. They insisted I needed stitches. They wanted to take me to the hospital immediately. By my standards, I wasn’t dying and I didn’t want to leave my deer there. I still needed to tag it and cut out its guts. My dad was under the weather and it wasn’t in his best interest to come out and take care of the deer for me.

My mom told me that Scott, the guy who hunts on the other side of the hill, was there and maybe he could get my deer for me. Okay, that was good enough. I got in the truck and we drove to the house.

My dad confirmed that I needed stitches, and he decided he would take care of the deer for me. My mom took me to the hospital. It was a long wait. I watched the Piston game to pass the time.

When the doctor came in, he asked what happened. I told him, “I shot a deer and the scope hit me in the head.” The doctor asked, “Did you get the deer?” I replied, “Yeah, I got the deer.”

I got seven stitches above my right eye. But, it’s nothing. 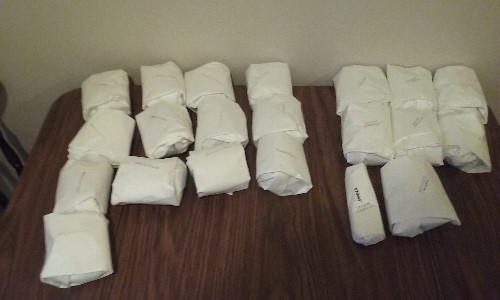