On Writing, by Stephen King 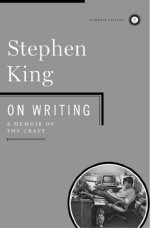 I read Stephen King‘s On Writing twice before. The first time was probably in 2003 and the second time would have been in 2006. Now that I have more experience in the business of writing and have a better understanding of the things King talks about in On Writing , I decided to give it another read.

I approach my writing projects pretty much the same way Stephen King approaches his. Like King, I usually don’t draw up an outline before I begin work on a project. I like to start the story and let it go wherever it wants.

King repeats a few times in On Writing, “the story is the boss.” I agree with that. It works for me. Other writers might use outlines and steer their characters like cars, and it probably works fantastic for them. That’s fine. Whatever works for you is great.

There are other things that King and I agree on, like story morals (Sometimes there’s a moral, sometimes there’s not, and so what?) and symbols (If there happens to be symbols, they might be lifted, but if not, that’s fine.). Stories do not require morals and symbols to be good stories. Stephen King and I would agree, anyway.

I don’t agree with everything King says in this book, but a lot of it is pretty similar to my own practices and believes about writing. Unlike some other writers you might meet, King admits that he screws up sometimes and I appreciate that honesty.

On Writing is a good read and I recommend it to anyone who is struggling as a writer. There are many useful tips.

Okay, so that’s another book knocked off my to-read list. I had three more nonfiction titles lined up before I got to read some fiction again. But I’m tired of nonfiction and I want a break from it, so I moved Gustavo Bondoni’s Siege to the top of the list. I’ll start on that tomorrow.