The Mars Run, by Chris Gerrib. 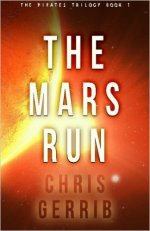 Chris Gerrib speaks my language when it comes to pirates and action-packed science fiction adventure novels. I remember Pirates of Mars (Book 2 of the Pirates series) and how much I enjoyed it. Last night I finished reading The Mars Run (Book 1) and it was fun.

Janet Pilgrim wanted to go to college after graduating high school. She had her sights on universities that were stepping stones to real careers. She believed everything was in place for her to go, but then her dad lost her college funds in another one of his get-rich-quick schemes.

Now Janet has no money for college and feels her life plan is postponed, but she is determined to get things back on track. While out and about, Janet comes across an ad for a space program. She decides to check it out and soon finds herself enlisting for a mission to Mars.

But Mars is a new frontier and sparsely  populated, which means the law is not much on Mars. When the ship is captured by pirates, Janet is put through harsh trials, but she does what she can to survive.

I’ll put The Night Watch (Book 3) on my to-read list, but I might reread Pirates of Mars first, just to get the series in order.