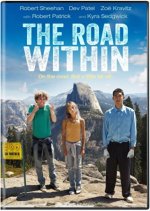 Finally I get around to telling you about this fantastic movie, The Road Within. I would love it if everyone stopped what they were doing right now, logged into their Netflix accounts to  watch this movie.

Why is this movie so important to me? Why do I want people to watch it? Well, mostly it’s because the lead character has an extreme case of Tourette’s..

I might have Tourette’s, or rather, I’m pretty sure I do. I admit, I have never been diagnosed, though I hope to have a confirmed diagnosis eventually. It really makes me mad when people wave off the notion that I might have Tourette’s and tell me, “Oh, you’re probably just frustrated.” as if I wouldn’t know the difference.

I’ve done a lot of research on the subject and it all seems to fit. I wouldn’t say I have an extreme case, but it is bad enough that I often feel like the Disturbance of Peace. I keep my windows closed at night because I’m terrified of my neighbors hearing my outbursts. I don’t worry about it so much during the daytime, because there’s usually lawnmowers and things like that running that I feel covers most of my outbursts.

But at night, it’s pretty quiet outside and I worry that people can hear every word that comes out of my mouth, whether I shout it at the top of my lungs or just blurt it. I feel that with the windows closed, my outbursts are at least muffled. Of course, sometimes they are very, very loud outbursts and I think the whole neighborhood hears them, even when my windows are closed.

What people don’t understand is these outbursts are not in anger. Yes, I have a terrible temper and I do yell in anger a lot too. But that’s a whole other issue and it doesn’t bother me near as much as the Tourette episodes do.

The stuff that comes out of my mouth during the Tourette episodes is often embarrassing shit and it comes out for no reason. It’s like some freak takes over the part of my brain that controls my vocal cords and tries his damnedest to destroy my reputation. Or as Vincent described it in The Road Within: “There’s a clown in my head, and he shits in between my thoughts. And he forces me to do the most inappropriate thing at the most inappropriate moment.”

So, why The Road Within?

Sure, there’s Jim Carrey movies, and you might’ve seen documentaries about Tourette’s, and whatever else. But I feel that The Road Within really shows you how Tourette’s works. I also find this movie entertaining, while many other accounts on the subject are boring.

The movie opens up with Vincent at his mother’s funeral. This is a stressful time for him and his Tourette’s are in overdrive. He’s twitching and blurting out numerous obscenities, all of which leave him visibly embarrassed. Eventually he gets up and exits the church to do some screaming outside.

Vincent’s father, Robert, sends him to a home for teens with problems. There Vincent meets Alex, who is a germaphobe, and Marie, who has anorexia. The three of them end up stealing their counselor, Mia’s  car to take a trip to the beach where Vincent wants to leave his mom’s ashes.

Their friendships develop along the way and they gain better understandings of each other, as do Robert and Mia who are in pursuit.