Life After Death, by Damien Echols 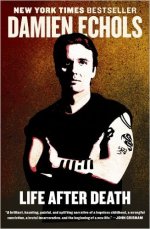 Remember the HBO documentary Paradise Lost that aired back in the 90’s? Where three teenage boys were charged for the murder of three younger boys in West Memphis, Arkansas?

Damien Echols is one of the West Memphis Three. His book Life After Death tells about the crazy ordeal he experienced from the time he was arrested for murder to the time he was released from prison in 2011.

Despite the lack of evidence and questionable actions by the police, in 1994 Echols was sentenced to death. In Life After Death, he describes the corruption of the system and life behind bars. In August 2011, due to new evidence, Echols was released along with Jessie Misskelley and Jason Baldwin.

Life After Death is very well-written. I found it hard to put down. It’s also very educational.