Walk on Earth a Stranger, by Rae Carson 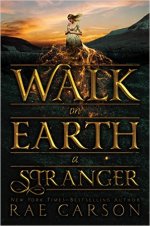 This was pretty fun. Rae Carson‘s latest novel Walk on Earth a Stranger is a real American adventure.

It’s 1849. Leah Westfall is fifteen years old. She lives in Georgia with her mother and father. She’s good with the rifle and hunts to feed her family, among other things that most girls in the area prefer not to do.

Leah also has a mysterious ability to find gold.This is the reason her family is well-to-do. It is a secret that hardly anyone knows. But Leah’s father had told her uncle Hiram the secret. In time Uncle Hiram murders her mother and father in order to claim everything that was theirs, including Leah.

When Leah figures out that it was her uncle who murdered her parents, she runs away, disguises herself as a boy and joins the California Gold Rush.

I thought Carson did an outstanding job in showing the hardships of those in the wagon train, crossing the country. I also really appreciated the respect she showed the natives through Leah’s eyes. Though many others in the wagon train were quite ignorant about the natives. At one point they went out of their way to slaughter and run off a herd of buffalo that a tribe was following, just to make things more difficult for the tribe. There were so many buffalo back then, seas of them, but ignorant people wiped them out.

Walk on Earth a Stranger is the first book of a new trilogy. I look forward to the second book.