According to the trail camera… 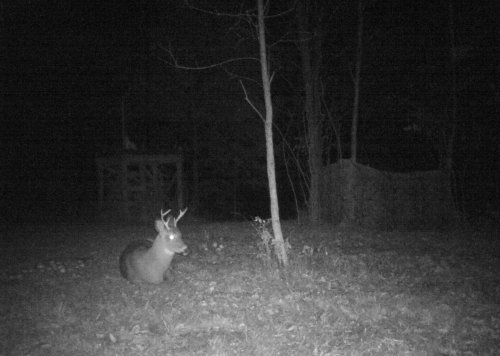 Every other day, my dad goes out and gets the card from the trail camera he has strapped to a tree in front of my hunting shack. For those not in the know, a trail camera is a camera that you leave at your hunting spot. It has a motion detector and takes pictures of animals that cross its view. So, my dad gets the pictures off the card and either emails them to me or I look at them when I’m at his house.

There has been a lot of deer activity around my shack. Some of the pictures show up to five deer in a single shot. A six-point buck keeps returning. I think it’s the same buck, anyway. The other night he made himself at home, laid down on the ground and posed for the camera.

I want that buck, but I’d happy with any mature-aged deer. It’s really the meat I want, but I won’t complain if I get a trophy.

There has also been several pictures of four-point bucks and good-sized does.

Though there has been much deer activity around my shack, the times they show up are not very favorable. They’re most active around the shack between 8 PM and 11 AM, with a couple having shown up at around 3 PM.

Because I can’t drive, I can’t always get over to my mom and dad’s house before 3 PM, and it’s especially rare that I get over there early in the morning.  So my hunting times are usually between 3 PM and 7 PM when it gets dark, or now that we’ve set the clocks back an hour, I’ll be coming in at around 6 PM.

And the deer don’t seem to show up between 3 PM and 7 PM, whether I’m out there or not. I will probably spend a night at my mom and dad’s house once in a while, as I’ve done every year during hunting season, so I can get out to my shack before sunrise.

But, according to the trail camera, it seems like no matter what time I head out in the morning, I’m just going to scare the deer away as I enter my hunting area and they probably won’t come back until night. That’s what it seems like, anyway. I hope I’m wrong and that I can get in position before the deer show up.

If there wasn’t a law against it, I’d probably spend the whole night in the shack so I’d already be there when the morning deer come. But you can’t do that.