What’s so special about MSD? 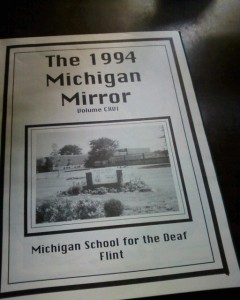 I often mention MSD, either in person or online. It’s MSD this, MSD that. When the old school building was torn down because a new school building had opened, I expressed sadness about the loss of the old school building. When a friend from MSD lost her son in early June, I fell to pieces over it. Jimmy Glover died at the end of July, and though I hadn’t talked to him in twenty years, I felt moved to post something about him on Facebook. Most recently, I stated that I want to see my friends from MSD before the year is over.

I’m trying to write something meaningful here, something that will properly convey why MSD is special, but I fear I’m not a good enough writer to do MSD the justice it deserves. But I’ll give it my best shot.

Every former MSDer I know still looks on MSD with fondness. The place was more than just a school for most of us. It was a home. We lived five days a week there and went home for the weekends.  Some of the students had attended the school, living in the dorm, since they started kindergarten. Others joined the school in later elementary grades, or junior high and high school. Many were transferred from Dearborn and Detroit schools where there were programs for deaf and hard of hearing students.

But wherever they came from and whenever they enrolled at MSD, most of them already knew each other. They had attended camps for the deaf and other deaf events since early childhood. American Sign Language was their first language. Most of them could talk using their voices if they had to, but many preferred not to. Some were completely deaf. Some were deaf, but did have a little bit of hearing. And some were hard of hearing, like me. But whatever category you put them in, MSD was like a comfort zone for them, a place for them to be with others who were like them.

At MSD, no one had to explain that they couldn’t hear you. Everyone got it. So, that was one frustration we didn’t have to deal with. Several teachers and staff were also deaf, and those who weren’t deaf were understanding of the students’ needs.

I don’t want to turn this into a rant about my experiences at the Lapeer public schools I’d attended, so I’m going to try to be brief about it. I mean, it wasn’t always bad. There were some good times. There were students who I got along with and there were teachers who were patient and understanding. But on the flip side, there were many very stressful and humiliating situations.

It wasn’t so bad in elementary school, but it really took a nosedive in junior high and it only got worse when I started high school. I wouldn’t say it was all because I couldn’t hear very well. My twin brother is also hard of hearing and he did all right in the public schools. But me, I was depressed all the time. I was terrified in school. When I got home after school, I’d go straight up to my room and spend the whole day watching TV or reading. I did not have a social life.

My freshman year ended. I had my summer vacation and shortly before school started back up, the depression and fear returned. I did not want to go back. I think it was my mom who suggested I enroll in MSD instead. But wherever the idea came from, once it was in my head, I was all for it.

I had been to MSD several times before, to see Betty Brown, have my hearing tested and get new hearing aids set up, but I had never thought I’d actually be a student there before my sophomore year. But once the idea was in my head, I was hellbent on making it happen. I felt that MSD was the change I needed.

I didn’t know sign language when I first started at MSD, but there was Tina Takacs, Margaret Barker and sometimes Marilyn Belsky who put in the effort to teach me, and there were students who showed me signs. I learned sign language and improved, but I was always pretty much in the beginner’s stage.

As I learned more about deaf culture, I began to see myself in a more positive light. I learned that being deaf or hard of hearing does not mean one is impaired. I learned that deaf people do not see themselves that way and I wanted to think the way they do.

Going to MSD is one of the best things I’ve ever done. It really turned my life around. I’m still in touch with friends from there. I wish I could see them in person on a regular basis, but they all live in different parts of the state and it’s hard for me to get around and see them. But we keep in touch on Facebook.