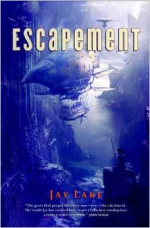 In Jay Lake‘s Escapement Paolina Barthes is a girl of fifteen born and raised in Praia Nova, a small coastal village in the shadows a Muralha, or the Wall. Women in Poalina’s village never amount to much in the world where men see themselves as superior to women. But Paolina is an exception. She has a gift unlike any other. Not only does she understand machinery to the degree that she can repair things that her village depends on, she also figures out how to invent something more powerful than any weapon known to man. Realizing Praia Nova has so little to offer her, Paolina sets out for England where she believes she will find wizards who can teach her more than she already knows. But she never makes it to England. Trouble meets her along the way and she finds herself hunted by the British Empire and the Celestial Empire, as well as two secret societies, the White Birds and the Silent Order. All of them want her gleam, which is the instrument she invented that can do the work of God.