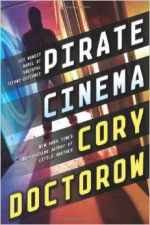 I’ve been pacing back and forth for a while now, trying to come up with the right thing to say about Cory Doctorow‘s Pirate Cinema. While reading the book, I had one idea after another about what I would say, but now that I’m done I’m at loss. I suppose it has something to do with the ending, which left me feeling slightly numb. To Doctorow, I say: Jeez, man, you sure know how to twist a happy ending.

Set in the United Kingdom, in a time when Internet access is more of a necessity. But rich movie makers in Hollywood and thereabouts have the means to force the government to pass copyright laws that are ridiculous and unjust. When Trent McCauley’s family loses their Internet service due to him downloading copyright material, his father can’t do his job, his sister can’t study for her classes, and his mother can’t get her medicine and disability benefits, because everything is done over the Internet. No longer able to face his family, Trent leaves his hometown in northern England and resettles in London where he becomes a member of the Jammie-Dodgers, a group of homeless young people living in an abandoned pub in a rundown section of the city. There Trent gets involved in the fight against the unjust laws.