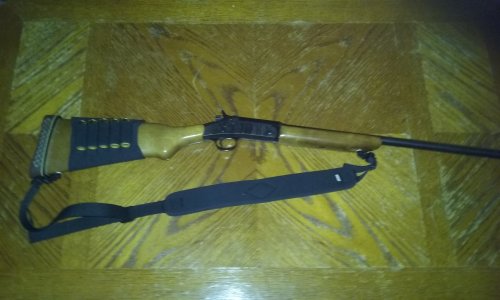 I got a sling on my break-action .20 gauge shotgun. The swivels are meant for bolt-action rifles, but they work fine on shotguns like this.

I was going to put a sling on the Mossberg 500 too, but for pump and semi-automatic shotguns it’s a little different. Although the swivels I bought say on the package that they fit most pump and semi-auto shotguns, the part that you screw on the end of the tube is way too small for a .12 gauge. It doesn’t say anywhere on the package what caliber it’s for, but looks like it would be the right fit for a .410. So now I gotta get a .410 pump or semi-auto shotgun.

The other day, my dad and I stopped by the hardware store in Davison because my dad needed some pipes. The owner, Dave, was my FFL dealer. Dave was working the register the other day. He told us he’s not selling guns anymore and that he recently sold the hardware store. He’s still there for the time being, but he’ll be moving out soon.

I’m disappointed about that. I preferred to buy from Dave because he knew my dad and he’d gotten to know me. I don’t like the idea of buying guns from FFL dealers who don’t know me. Years ago, when I went to buy a shotgun, the dealer mistook my cerebral palsy for drunkenness and was asking why I was weaving from side to side. He also couldn’t understand why I had trouble reading the form or hearing him. It was explained to him, but he wasn’t convinced. He believed I was drunk or on drugs. It was pretty humiliating.

With Dave, it was easy and relaxing. He was understanding about my disabilities.

So, guess I have to find another FFL dealer.