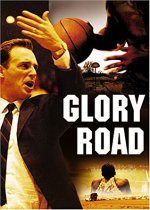 The other night, I watched Glory Road on Netflix. It’s another one of those historic sport movies. This one is about the 1966 NCAA Basketball Championship team.

Don Haskins is hired to coach basketball at Texas Western, a small college in El Paso. Haskins goes  out and recruits black players from different states, such as Indiana, Michigan and New York.

A good movie. I paused it several times to look up something mentioned, so I would know more about it.