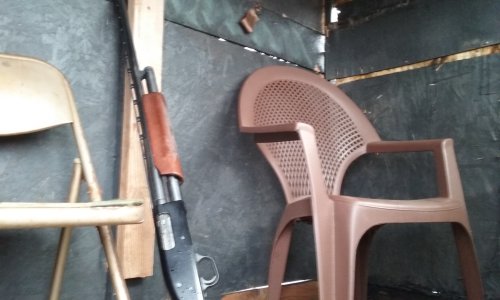 Made it out today. Yesterday it was pretty warm outside, but today it was freezing. It even snowed a little. I know enough about bats to know they don’t mess around when it’s cold. They huddle together for warmth and stay that way until temperatures rise again. Any bat not in the huddle is either dead or dying.

So, I wasn’t too worried about being in the shack today. I admit that I was a little jumpy, but not terribly. Got in a few hours of hunting, but didn’t see any deer. Pretty much just read. Been getting in a lot of reading while sitting in the shack this year.

I packed it up when it was getting dark and made it back to the house in time to catch the last quarter of the Michigan-Indiana game. That was a hell of a snowstorm you guys in Ann Arbor had. People were making snow angels on the field. At times the snow was falling so hard, we could barely see the game.