June 1942: A Boy Out Of Time, A Girl Out Of History, by Quito Washington 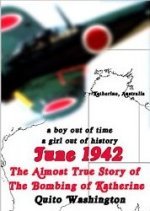 I would say it’s science fiction with a mild blend of fantasy. Though there were times when I thought it was a ghost story, then I’d think it was contemporary fiction, but with some of the story set in the past. But in the end it came clear what this actually is and it was well played. The plot was strong, the story was convincing, the characters were believable.