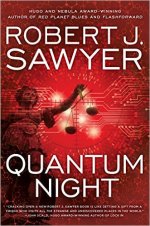 Robert J. Sawyer‘s latest novel Quantum Night explores psychology and has me wondering if I’m a Q1, a Q2 or a Q3. Or maybe I’m sometimes one or another, depending on the time of the day and whether I’m wide awake or not. Right now I’m awfully tired and feel like I’m just going through the motions, much like a classical Q1 p-zed.

Jim Marchuk is a professor at the University of Manitoba in Winnipeg who developed a procedure that determines whether someone is a psychopath or not. Because of this, he is asked to be an expert witness at a murderer’s trial in Georgia.

Jim travels to Georgia for the trial. Though he’s only there to explain his procedure, the prosecutor grills him about his past and he does not remember things that he should remember. When he returns to Canada, he discovers that he’s missing six months of his life.

Jim’s missing six months are the result of an experiment he took part in twenty years earlier. The experiment changed him from a fully conscious, thinking human being (Q3) to a mindless animation (Q1). Jim is determined to understand what had happened to him during those six months, and what had he done?

A good read and quite fun.