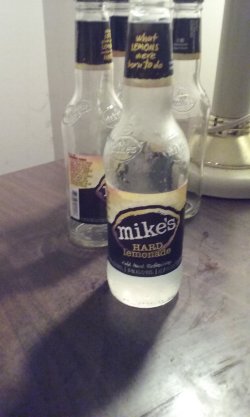 It’s pretty hot tonight. I’m sweating, drinking cold lemonade, listening to Nirvana and Sia and working on a short story. This short story will be the last for a while. I’m going to focus on the next novel when I’m done with the short story. That’ll be 25 short stories on the market. I’ll keep moving these stories down the market list until they sell.

Deer season starts in a week. I haven’t purchased the license and kill tags yet, but I’ll be getting them soon. I’…m plan to get over to Mom and Dad’s tomorrow and take a look at The Bat Shack. I hope the shack is still holding up. I never got around to rebuilding it. If it’s too damaged, I might find a different spot to hunt this year.

Anyone notice how many Mom & Pop stores in the area are suddenly going out of business. It’s freaking sad. I have a feeling that the buildings these stores were in are going to sit abandoned for years and years. I’m hoping someone turns one these buildings into a butcher shop or meat market. It’d be nice to have such a place closer to where I live.

I got yard work to do tomorrow. Have to rake and bag leaves. and maybe mow the lawn. My next door neighbors have a very healthy apple tree in their backyard, right next to the fence. A lot of the apples land in my yard. I’m going to bag them up and use them for bait.

I’m tempted to tell the neighbors that if they don’t want the apples on their side of the fence, I’ll take them. But I’m shy. The apples have a strong scent that I’m sure will attract deer.

I watched the Patriot-Lions preseason game. The Lions had a nice comeback in the second half. The score was Lions 7 – Pats 24, but Lions caught up and got ahead. The new score was Lions 28 – Pats 24.

But the clock just wouldn’t run out fast enough. The Pats made it into field goal range twice in the fourth quarter and the kick was successful both times. So, the final score was Lions 28 – Pats 30.

The final preseason game is Thursday night against the Bills. The regular season starts September 10. Game 1 will be against the Cardinals.

After the Lions, I flipped over to FS-D and watched the last few innings of the Tigers-White Sox game.

One more week till College Football.

I stayed home today. Mowed the front yard and did some house cleaning. I watched the Tigers lose to the Dodgers again. The Tigers didn’t manage to get in a single run.

After the Tigers, I watched the Lion-Jet preseason game. That was a good game. The Jets  were scoreless for most of the game, but then they got in two field goals.

Matt Prater is still looking good. I think he made every field goal he was sent out to kick.

…I wrote 1,671 words, made two submissions and got all the chores done.

The Tigers didn’t play today. I did have the Buccaneer-Jaguar game on, but didn’t pay much attention to it. The Lions’ next preseason game is Saturday, against the Jets. The Lions did very well against the Colts in Sunday’s game.

College Football starts in a couple weeks. The Wolverines will kick off their season against the Gators.

I’ve been depressed this week. Trying to snap out of it and get back into my normal routine. It still feels like there’s pins and needles stuck in my heart and I’m having a hard time motivating myself. I pretty much want to stay hidden, but at the same time I feel a need to stick my neck out again.

I went ahead and bought the second season of Six Feet Under last night and watched the first episode. It’s kind of neat how I’m remembering these episodes as if no time has passed since I last saw them in 2003. I wouldn’t mind going back to 2003. It was a good time. I was in a relationship with a woman I never got over.

I woke up this morning remembering something from my childhood. It was the last year that my brother Fred and I were on the Lapeer Steelers’ freshman team. This young, college-aged assistant coach, after speaking to the entire team, threw a football into the mud down the field.

I’m not positive that this is why it happened, but I had been under the impression that the assistant coach, after throwing the ball, told Fred to retrieve it, and then he told the rest of us to tackle Fred.

I’m not positive that those were the words the coach said. My deafness didn’t allow me to pick that up clearly. But the coach did say something after throwing the ball and Fred went to get it. Then the coach said something else and the entire team went after Fred.

I trailed behind the charging team, uncertain of what was going on. I watched the dog pile grow as thirty to forty guys jumped into it. I think I added my weight to the pile, though by the time I got there, the pile was so high that I couldn’t do much more than lean against it.

And then I heard Fred yelling. I knew it was him and his yelling was a terrifying sound. I realized what was happening. In a minute the coaches were there pulling everyone off. When the last guy was pulled off, Fred was lying face down in the mud. I remember sitting beside him while everyone else took off to run a few laps as punishment. But then I got up to run the laps too. Not sure if someone told me to or if I just thought I was supposed to.

But that time was real punishment. Instead of the normal triangle route, we were made to run along the outside of the entire field. Our practice field was a big park, surrounded by hills and a creek on one side.

Here’s a Google Earth screenshot of the field. Looks like they cut down a lot of the trees that used to be there. 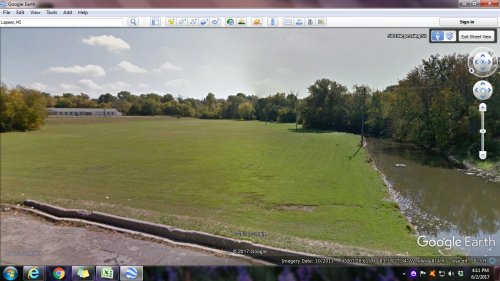 We had to run along the outside of the field three times. When we finished our laps, Fred was sitting on the picnic table recovering from nearly being killed by the entire freshman team. But then, one of the coaches made him run the laps that the rest of us had just finished.

But that last year that Fred and I were on the freshman team, Delbert Anderson and the other coaches from the past years had moved up to coach the J.V.. Several of the new coaches were stupid assholes, true posers putting on some pretentious military-wannabe act.

My dad was one of the defense coaches that year, but he usually arrived late because of his job. He worked as a painter at an auto body shop in Rochester. I imagine if my dad had been there when that thing happened to Fred, he would have beat the shit out of the assistant coach who set it into motion.

During most of the game, I was thinking the title of this blog entry would be “Not Every Bowl Can Be A Brady Bowl”, but things got turned around in the fourth quarter.

I spent the day at mom and dad’s. We had a lot of food, chicken wings and ribs off the smoker, plus a bunch of other stuff to munch on while we watched the game.

I admit, I considered rooting for the Falcons, but in the end I decided to root for Patriots again. First, because I’d always considered the Pats to be one of my backup teams. Second, because Tom Brady was Michigan’s quarterback back  in the day. So, I decided I’d stick with the Patriots.

I know about the controversy surrounding the Patriots last Super Bowl victory, but, eh, I decided that I didn’t care.

I would have been perfectly fine if the Falcons won, though. The Falcons had a very good lead for most of the game. They were beating the hell out of the Patriots, sacking Brady and all that. But I guess Brady found his arm at some point during the fourth quarter and screwed it back in.

Jesus Christ, the Pistons kept missing their shots. Seems like every time I turn on a Piston game, this is what I see. The Pistons dragging behind the other team.

The Pistons had plenty of chances to get ahead of the Kings, but they kept missing their shots.

Lately while watching my teams lose, I get so mad that my bitching doesn’t make sense. My words don’t come together in a proper sentence. It’s been like that since the Wolverines lost to the Buckeyes. After the Wolverine-Buckeye game, I watched the Lions blow their first place standing and their Wildcard, and the Wolverines lost the Orange Bowl.

My teams are killing me.

Then, last night, the Lions lost to the Cowboys. >:(

Through most of the first half, the Lions looked good and we thought they were going to do it, but of course not.

I guess the refs made some questionable calls. There was what appeared to be a facemask grab committed by a Cowboy as he was about to cross into the end zone. I think the refs decided it was a touch, not a grab. Maybe it was, I dunno.

Another time, Caldwell was calling for a timeout. It looked like he’d called for the timeout a few times, but the clock was still ticking. Caldwell looked pissed.

That’s what I noticed. But, even if the refs didn’t make a single bad call, the Lions still would’ve lost. Looked like their performance dropped in the second half. Prater even missed a field goal. The final score was 21-42. Yay. >:(

Also, Friday night, Michigan plays Florida State in the Orange Bowl. I know Michigan will win. Wish I could say the same about the Lions when they play the Packers on Sunday.

Yesterday, the Lions managed to get two field goals, while the Giants got one field goal and… two touchdowns. The final score was 6-17 and the Lions are now 9-5.

The Lions are still in first place, but they’re now leading the NFC North by only one. The regular season has two games left. Although the Vikings lost yesterday and are no longer a threat, the Packers did not lose.

Next week the Lions have the Monday Night Football slot with the Dallas Cowboys. I hate the Cowboys, not as much as I hate the Buckeyes, but still….

The Cowboys are leading the NFC East. They’re currently 12-2. Good Luck against that, Lions. If Stafford and them can beat the Cowboys next Monday, I’d be impressed. But after their loss to the Giants yesterday, I’m preparing for the worst.