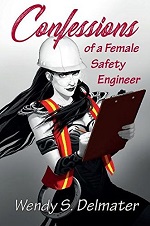 I never doubted that construction sites are dangerous, but I don’t think I put much thought into how dangerous they are or what the dangers are. Wendy S. Delmater goes into all that in Confessions of a Female Safety Engineer.

Wendy was a safety manager who did much of her work in New York City. It was her job to make sure construction sites were run safely. She made sure that crews working on skyscrapers had fall protection, that gases, chemicals and oxygen were stored properly, she took steps to make sure crews did not have to work in areas with lead. What I just listed there is only a small percentage of what Wendy had to deal with on the job.

She was a couple blocks down the street, standing on the sidewalk when the Twin Towers collapsed on 9/11. Although that’s not really what the book is about, Wendy’s account of what happened on that day really drives home how terrible it was. It was bad enough for those who saw it on TV. Imagine if you were on the sidewalk, not far from the Towers.

I feel like I learned a lot from Confessions of a Female Safety Engineer. It’s a very interesting read and it gave me a better idea of what it’s like working construction in a big city like New York City.

A hard book to put down.